Let’s face it: when most games describe themselves as a ‘mental challenge’ they’re saying it in earnest hope rather than actual truth.

But Strange Masks, the latest gaming title from indie outfit ThinkSlow, would live up to such a claim – if it chose to make it.

If the name rings a bell then you be recalling their the 52-level strong puzzle game ‘Mind Labyrinth‘ – designed to played with a neuro-interface controller – that they brought to the Ubuntu Software Center just under a year ago.

Like Mind Labyrinth, Strange Masks was developed entirely on Linux first, before being ported over to Windows and OS X.

The premise of Strange Masks is simple: As you navigate through a “maze” of masks you must find and ‘activate’ the coloured ones in sequence. 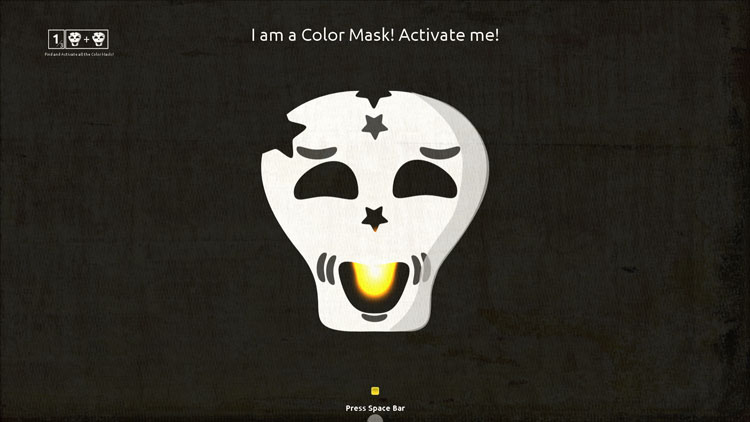 Once all colour masks have been activated you then zip back through the maze activating ‘fire masks’, and finding the way out, all against a not-so-liberal countdown.

That is, essentially, it.

‘The brain becomes engaged. The memory cells spark with activity.’

But as fond as I was of the game during my time playing it I am not blinkered. Strange Masks is not a classic in the making; it’s not an undiscovered indie gem; nor is the game going to redefine any genres.

In fact, to be frank, the first few levels are more like an interactive slideshow presentation than a storied brain-teaser. There’s a bit too much ‘shuffling left-and-right between some faces, hitting space every now and then’.

But after a few levels things pick up pace. The brain becomes engaged. The memory cells spark with activity. Your fingers smoke from the frenetic tap-mashing required to keep pace and beat the countdown.

The “challenge” comes less from the game and more from overestimating your own reflexes and faculties. ‘But this game is so easy!’, you’ll cry after losing one of the later levels for the 5th time in a row.

To stave off repetition there are over 50 levels across ‘2 great labyrinths’, each with three levels of difficulty.

‘Challenge’ modes let you replay levels individually to best your own scores.

The game auto-saves throughout play so you can quickly close it when the phone rings – or the boss looks over your shoulder!

Strange Masks can be played using a keyboard (default) or using a game-pad – assuming you have one set-up in Ubuntu.

Strange Masks is such an apt title. It is a strange, peculiar little game. It straddles the line between straightforward and challenging – and for only $2.99 that’s not a bad place to be.

Strange Masks is available to buy from the Ubuntu Software Center on Ubuntu 12.04 & 12.10.

A 15-level demo is available from the developers website @ strangemasks.com