The HTC media event has passed without mention of anything Ubuntu. This rumour is therefore squashed.

It’s either a masterstroke of timing or an unfortunate coincidence but both Canonical and Taiwanese smartphone & tablet makers HTC are to make important new product announcements later this evening.

At 4PM GMT Canonical will be taking the wrapper off of what is widely expected to be a tablet version of their ‘Ubuntu Touch’ OS. Meanwhile, HTC are due to announce their new flagship HTC One Android handset – and a new mystery tablet-sized device – to a legion of mobile journalists.

Could these events somehow be related?

The short answer is we don’t know. Prior to Canonical’s countdown going online few were expecting an announcement from them. And the usual ‘industry sources’ close to HTC and their ilk have yet to breathe word of some sort of tie-up.

Lack of rumour isn’t proof that nothing is happening of course, but it does nudge hope of a HTC Ubuntu Touch tablet into ‘unlikely’ territory.

But does that mean that it’s out of the realm of possibility? Certainly not.

We already know that the first Ubuntu Phone handsets will be coming later this year so at least one hardware manufacturer and/or carrier has taken a punt on the upstart OS.

Thankfully the suspense won’t be drawn out for much longer. Both companies are staging press conferences later this evening.

So whether we see the reveal of a physical Ubuntu tablet or just a tablet-focused OS, today is certainly going to be an exciting one for Ubuntu users… 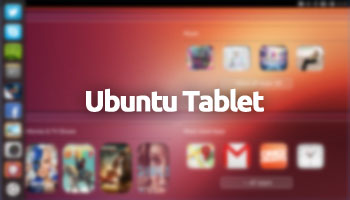 Ubuntu Gearing up For Tablet Announcement Tomorrow
Read Next