Spotify are giving Linux users a taste of new features first with their latest Spotify for Linux Preview release. 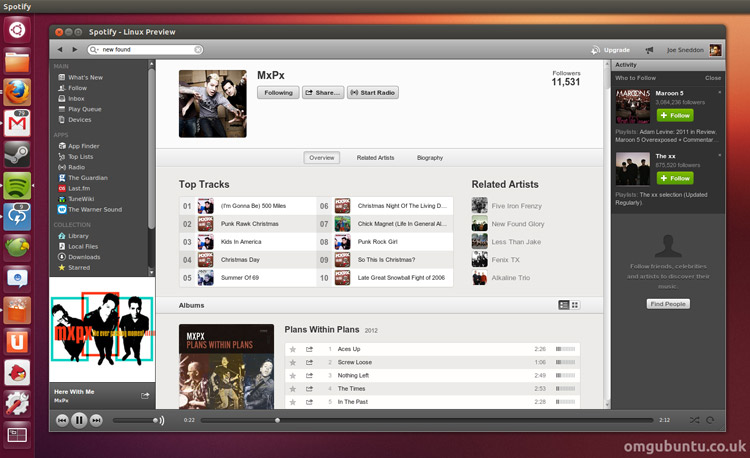 Spotify is the biggest music streaming site in the world. It boasts over 20 million users, 5 million of whom subscribe to one of the service’s paid plans.

And it’s not just big in userbase. The company say that some 10,000 new tracks are being added to its online library each and every day, expanding on the 15 million tracks already available.

That’s a lot of users. And a lot of music.

For Spotify the challenge is in getting users to know of and discover ‘new’ content.

To do this the service is rolling out a new Twitter-like ‘Follow’ feature that lets you keep tabs on their favourite bands, companies, magazines, and other so-called ‘influencers’.

When someone you follow adds a new track, album or playlists to share you’ll be notified of it; no searching, no fuss.

But it’s not just limited to those with music to share. You will also be able to follow other Spotify users and see their most recently listened to music in the ‘people’ side-bar.

Sounds similar to the ‘Facebook integration’ already baked into the app, doesn’t it? Coupled with the fact that you no longer need Facebook to sign up for the service, it this is the first step towards a ‘music-orientated social network’.

Social features aside, one other new feature is soon to be added: ‘Discover’.

It’s not present in the app at the time of writing, so don’t know exactly what it will do, but from a recent press event held by Spotify we’re told that it will recommend new artists and tracks similar to that you’ve already listened to.

These features have only been available to a limited number of Windows and Mac users.

Social features aside, this release also sees an interesting change to the way the application is packaged.

Spotify now installs to and runs from the ‘/opt‘ directory. And?  This location is a requirement for apps wishing to be distributed through the Ubuntu Software Center.

This seems to back up something I heard a few weeks back. Namely, that the Spotify client will be added to the Ubuntu Software Center later this month.

How To Install Spotify in Ubuntu

Spotify can be installed via a repository (the recommended way) or by download a .Deb installer from the repository web-page.

To install from the repository – and thus automatically receive new updates to the app without having to re-install – follow the guide linked to below.