This time the irresistible offer is back touting mobile-friendly games.

Humble Indie Bundle for Android 4 is made up of 5 games, plus an extra one for those paying more than ‘the average’ price.

So what’s on offer to tempt us this time?

There are three ‘new’ titles:

Plus, as is so often the case these days, a number of ‘repeat’ titles:

If you pay more than the average price you’ll also nab another repeat title – the perplexing puzzler Machinarium.

Want in? Hit the link below

If you’ve heard about the Humble Bundles but aren’t entirely sure what they are or how they work read on to be educated.

The premise is simple: for 2 weeks a ‘bundle’ of games are put on sale – only without a price. Instead it’s up to you to decide how much you want to pay for them. You could pay a mere cent, tens of pounds, or a couple hundred euros – it’s entirely up to you. 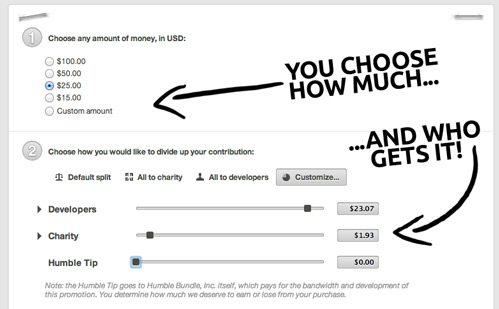 Again: it’s entirely up to you.

Support payment methods include Paypal, Amazon Payments and Google checkout – so you can pay in safety.

Once you’ve bought the bundle titles you’ll be sent an e-mail containing a unique link to a download page. Don’t delete this mail – if you ever need to download the games again you’ll need this.

All games can be downloaded for the platforms specified on the download page, but these typically always include Windows, Mac, and Linux – as well as Android in this case.

To install the games on Ubuntu just hit the ‘Download for Ubuntu‘ button to get them via the Ubuntu Software Center.