Ubuntu 12.10’s Messaging Menu icons have received a number of minor changes of the course of today (October 3rd).

First there were new pips, then came new status icons, now a decision has been taken to do away with the pips altogether!

The first update of the day brought with it five revamped ‘pips’ – the small icons that appear on the panel ‘envelope’ icon to denote your online status (online, busy, invisible, etc).

As revamps go it wasn’t dramatic; the new designs didn’t deviate that much from the ones they were replacing. They looked nicer, being better defined against the ‘envelope’ icon backdrop, and were both larger in size and more colourful than the earlier versions.

For reference here is how the ‘status pips’ looked before this update:

A few hours after the addition of new pips came an updated set of status icons for use in the Messaging Menu itself.

Like the new ‘pips’ these aren’t a massive overhaul but are more visually distinct when viewed within the menu. 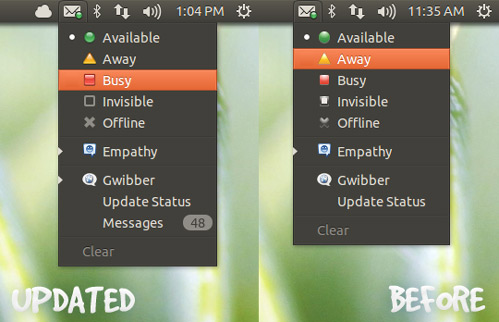 As great a combination as the new status icons and new-look Pips were they were not to be.

The last update of the day saw a decision taken by Ubuntu’s Mark Shuttleworth to nix the use of status pips for this release. It seems the balance between colours, gradients and overlays wasn’t quite as it should be.

So, for Quantal, the Messaging Menu will look and behave as it did in Ubuntu 12.04.

Personally I found the ‘pips’ useful. They let me quickly check my status with a glance at the notification area, saving me the need to open the Messaging Menu or the Empathy chat app itself.

A simple user-experience, and one that better made use of the ‘Messaging Menu’ in terms of it being a messaging hub.

Good news for Pip fans like myself is that they will (tentatively) be worked on and refined for inclusion in 13.04.

Ubuntu 12.10 testers will find the new icons waiting for them in the Software Updater.

Over the last few weeks a number of commenters have expressed their disappointment – in both polite and not-so-polite ways – with us giving coverage to ‘minor Ubuntu updates’ such as this.

Not everything we write about will appeal to everyone. We like to keep things varied so that readers of all tastes may find something that interests them.

So if this post annoys you bear in mind that you are free to pick and choose what you read; you’re not obliged to read anything that you don’t think will interest you.