Popular to-do app Wunderlist will be coming back to Ubuntu soon – natively.

Wunderlist was previously available to users of Ubuntu 11.10 through the Software Center. Compatibility issues between the ‘Titanium‘ framework used to build the app and later releases of Ubuntu meant that it wasn’t able to be re-added.

But the developers of the app, ‘Wunderkinder’, have told me that Ubuntu support hasn’t been crossed off of their to-do list just yet. 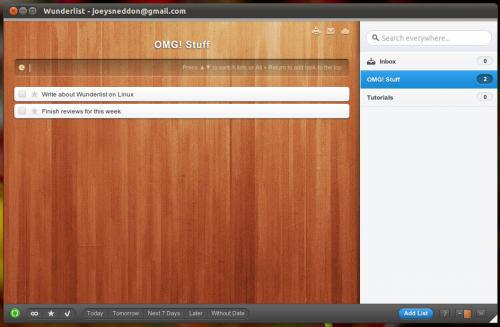 With focus now shifting onto Wunderlist 2, the decision has been taken to move away from apps made using the Titanium to ‘rewritten native applications on all platforms‘ – which will include Ubuntu.

A new cloud service will also be introduced to powered the sync features of Wunderlist 2. This, the company says, will allow them to “scale and release new product updates every four to eight weeks.”

Ubuntu users aren’t been without choice in the intervening time. A new breed of note-taking apps have sprung up to fill the gap, including Nitro Tasks and Tickit.