The Gazelle Professional is the flagship laptop from Ubuntu computer maker’s System76.

I’ve spent the last month testing it, having blindly invested a thousand pounds into a finely tuned version of the laptop after hearing great comments about it.

Was it worth the money? Read on to see…

Before I start I’ll get the specifications out of the way.  I bought a customised version of the laptop which came with:

The laptop took twelve days to arrive from placing my order.

It arrived in two blank cardboard boxes, with the one stuck inside the other for safety. The laptop also had plastic film attached to it to protect it from scratching inside the box.

It didn’t come with any accessories bar the worldwide compatible (120V/240V) charger with a US plug and a short letter from System76 with two Ubuntu stickers attached to it.

The charger has an American plug on it, but due to it’s worldwide compatibility all you need is a cheap adaptor to use it elsewhere. I use this £1.55 adaptor in the United Kingdom or this £5.11 adaptor in Europe.

As my first drive is an SSD, and there’s concerns about their longevity, I’ve moved the /home to my secondary drive as well as enable TRIM, decrease it’s ‘swappiness’ and adding noatime to my fstab (stops the system from storing the last time a file was read, which reduces the number of writes performed to the drive at the expense of compatibility with some older applications, like Mutt. However, so far, disabling it hasn’t caused any problems).

When I first took the laptop out from the packaging I was amazed by how beautiful it is.

The back of the laptop is very clean. It is a large plate a polycarbonate material (a hard type of plastic) made to look like titanium-coloured brushed aluminium with angled edges and a vinyl System76 logo at the centre. 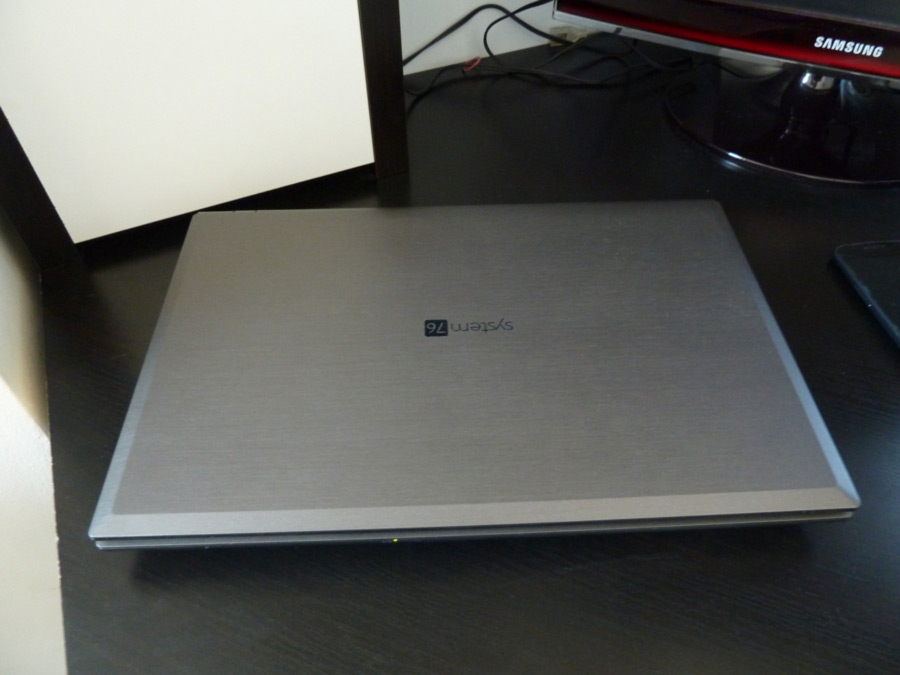 The borders around the screen are a shiny plastic with rubber pads attached to protect the screen when closed.

Sadly, these ‘shiny plastic borders’ gather quite a lot of dust, which just looks messy. There’s also a thinner, also angled border around the shiny border apparently also made out of the same polycarbonate material, although it feels a bit different to me (probably just due to the different finish though).

In the middle of those two borders, and in the centre above the screen sits a 1.3MP webcam. This works well enough for video calls.

The keyboard area is also made out of the same material as the back, with a depressed area for the keyboard in the middle; 5 LED’s for power, input/output, num lock, caps lock, scroll lock and a power button at the top, a trackpad at the bottom (more on the trackpad and the keyboard later on) with a small microphone next to it.

Even though the hole for the microphone is quite small and shallow something will inevitably get stuck down there at some point. Another trade off: during a quick Hangout my friend noticed that it picks up the noises the keyboard makes.

Left-most of the bottom of the laptop there are two stickers which are rather pointless in my opinion. Whilst most users will care whether the audio quality is good, being reminded every second of usage that it’s “THX TruStudio PRO” will be less important.

These stickers could definitely do with removal.

The laptop is not big by any means, but it’s definitely not an ultrabook either. It’s 37.4cm in width, 25cm in depth and up to 3.7cm in height. It weighs in at just under 2.5kg. Judging by the specs and battery life, it’s closer to a desktop than a laptop focused on portability, but I didn’t have a problem carrying it around town.

A plethora of ports are included with the Gazelle.

On the left there’s a power port, a VGA and HDMI ports for connecting an external monitors (capable of powering two screens, including the internal one, at full HD resolution), an 10/100/1000Mb Ethernet port, two backwards-compatible USB 3.0 ports, an eSATA port and an SD card reader.

The right side of the laptop has either a CD/DVD drive or the HDD caddy (depending on your configuration), a USB 2.0 port and the 3.5mm in/out jacks.

Flipping the laptop reveals an area of black, once again angled plastic disfigured by a plethora of vents, screws and locks. The good side of this is that you can easily replace your 2.5″ hard drive, RAM and battery. There’s also four small rubber stands, which aid ventilation and grip the laptop to your desk. They’re perfectly rectangular, but not so that they dig into your legs. 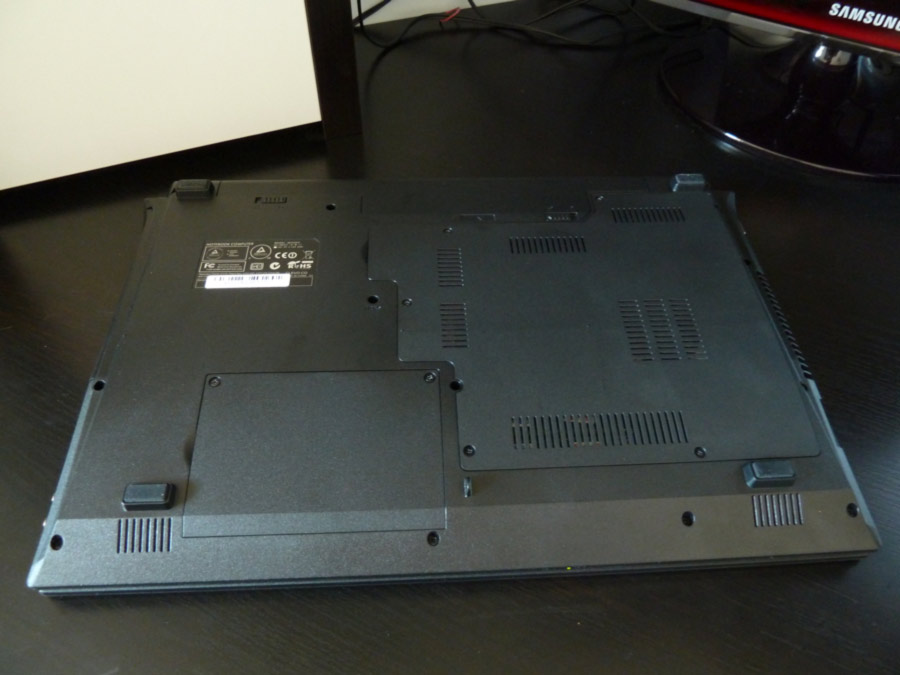 The keyboard was loud and the touch pad felt rough. However, after using the laptop for a bit longer it turned out these problems were caused by me rather than the hardware. Coming from a slightly battered Toshiba, I was really harsh on the laptop.

In actual fact, the keyboard is really nice. It’s easy to type on, but doesn’t feel flimsy. It’s well sized, and even there’s lots of space between the keys, you always end up hitting the right key. 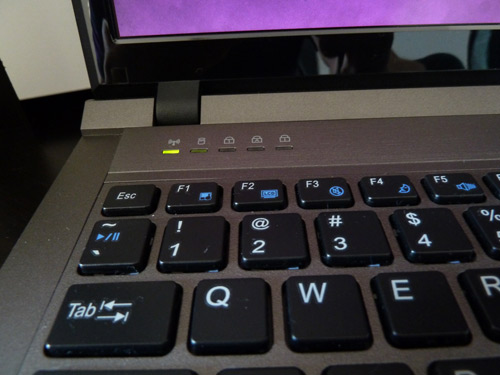 A really nice touch is the inclusion of an Ubuntu key, as opposed to a Windows key – even if it’s only a wonky sticker.

If I was being picky, I could also say that some of the letters imprinted onto the keys are quite rough and catch onto your fingers when typing, but it’s not a big deal.

The touchpad also felt awkward at first use. It is embedded into the aluminium, so I couldn’t really decipher where the trackpad stopped so I wanted to keep on moving my fingers past where it stopped. There is a slight depression at the top of the touchpad, but you won’t even feel it unless you’re concentrating on trying to feel it. The buttons aren’t split in any way either.

Also, because the aluminium is only brushed one way, moving my finger upwards was hard and jerky. However, after a while you get used to it. I stopped pressing it so hard after a short while, so the trackpad felt rather smooth and comfortable to use.

By default it uses two-finger scrolling and tap to click, but those options can of course be modified in Ubuntu’s touchpad settings.

One aspect of the Gazelle that certainly didn’t disappoint me was the screen: it is nothing short of excellent. Every time I look at it I still notice how great it looks.

It’s definitely not retina density (141ppi on the System76 compared to 220ppi on the new MacBook Pro), but the quality of the display itself more than makes up for the moderate pixel density difference. It can get really bright, but it also goes down quite low so that you can work in dark without disturbing anyone. 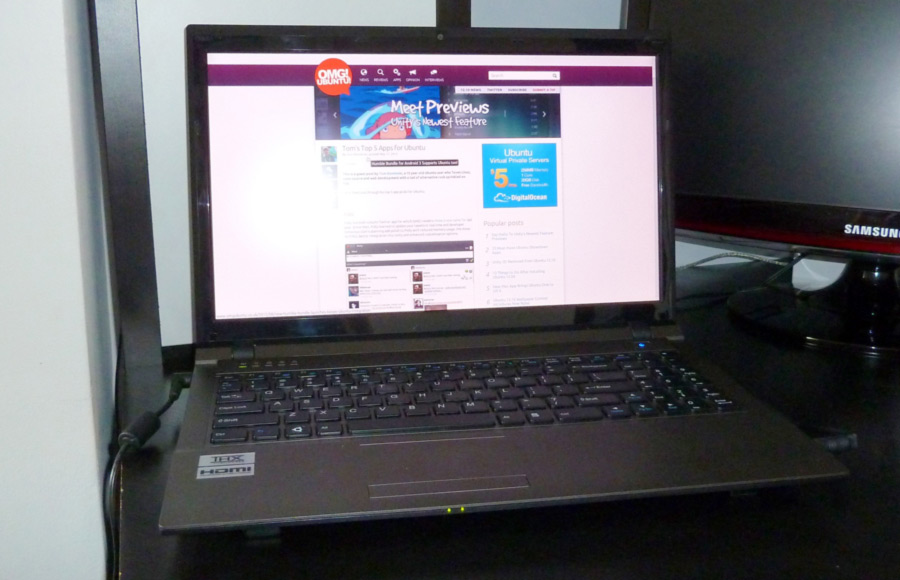 I’ve seen many people be unsure about the quality of the screen due to the fact that it’s matte, but there’s no need. Everything is crisp and the colours look amazing. The display is definitely this laptop’s high point.

The speakers on the other hand are not as good. During normal use they sound as well as laptop speakers could, but if you pay attention to the sound it can sound a bit tinny.

A big downside is that the speakers are placed on the angled base of the laptop, therefore pointing the sound at your desk, instead directly at your ears. I’ve not been able to find a reason for this- I tried playing music and then shutting the lid of the laptop, but that stopped the playback. Their placement makes them sound… awful, to be honest. It really doesn’t make sense to put them there. They make the sound muffled.

Luckily, there’s a 3.5mm jack in and outs on the side of the laptop, so after you plug in an external speaker system, all is well.

Now, for the most important part: the actual power. The laptop is blazingly fast. During the last month for which I have had this laptop, it has not lagged once. All the animations in Ubuntu are smooth and everything is just really fast.

There’s not much I can say about it- there’s just so much power there’s no way you can be disappointed. The only problem with the amount of power this laptop has is that Thunderbird and Dropbox often have trouble connecting to the internet, as I’ve set them up to start at login. They start up so fast that the laptop simply hasn’t got enough enough time to authenticate with the Wi-Fi network. Both of them connect soon after complaining though.

The laptop doesn’t get hot or noisy during normal use, like browsing the web or tweeting. Even without adequate venting, like when you sit the laptop on your legs, it’s more ‘pleasant warm’ rather than ‘scorching hot’. The only part that tends to get a bit hotter than the rest is the SSD. Currently the laptop is so quiet that I’m doubting whether the fan is even running. Obviously, if you’re doing something more extreme, like playing 3D games then it will get louder and warmer, however the fans deal with the heat well without being deafeningly loud.

I’ve not done extensive testing of the battery life, but most of the time Ubuntu suggests two hours from a full charge, and that seems to be true. While it definitely isn’t something you’d completely rely on while on the go, it’s understandable considering all this great hardware this laptop houses. If you’re doing something chilled like casual tweeting and IM’ing, then the laptop should be able to last three full hours.

This System76 Gazelle Professional is an amazing laptop.

The amazing amount of power the Intel Core i7 processor brings is only held back by some weird hardware and usability kinks, like the dodgy first impressions or all these LED’s that clutter the beautiful design.

Have you got any questions about my experience with the laptop? Post them in the comments and I’ll do my best to answer them.

Thanks to Linux Format for the SSD tips, and to System76’s Matt

Home » Hardware » The System76 Gazelle Professional: Just How Good Is It? [Review] 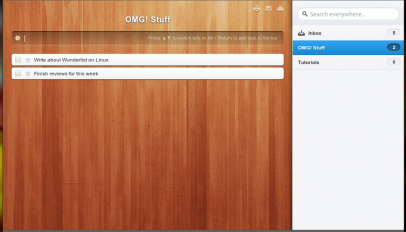 ‘Wunderlist’ To Return As Native Ubuntu App Soon
Read Next