Ubuntu’s Messaging Menu has been updated with a couple of  new features in the development builds fo 12.10 – the most notable of which is the ability to hide.

With this in mind Ubuntu devs have added in a new feature that hides the menu when no applications are installed that use it (i.e. meaning that Gwibber, Thunderbird and Empathy have all been uninstalled).

It’s a small change, and one that most users won’t take advantage of, but sure to be appreciated by some users nonetheless.

But hiding when it has nothing to show isn’t the only change in this update. The Messaging Menu now also displays your chat status via the panel icon – something we told you was on the way in late August. 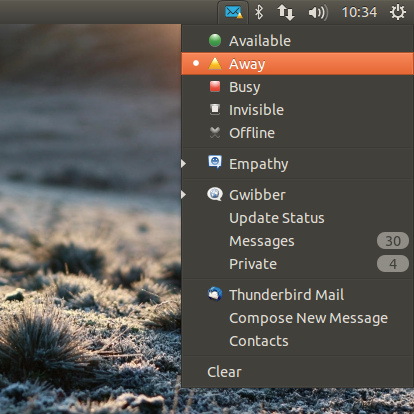 These icons display your chat status to yourself (I can’t recall how many times I’ve been “invisible” without realising).

Where no chat accounts are enabled you’ll still be stuck with an annoying green dot (to denote ‘online).

Quantal testers will also notice something else in the top screenshot: the Messaging Menu is pretty again!

The last few weeks saw the separators and count lozenges removed (due to a back-end change) resulting in a scrunched up, less-scannable mess.

That look was never intended to be permanent (despite reports to the contrary elsewhere) so if you weren’t a fan you’ll appreciate the fact you can open the menu without shaking your head in disappointment.

Assuming you have anything installed that shows you ;)