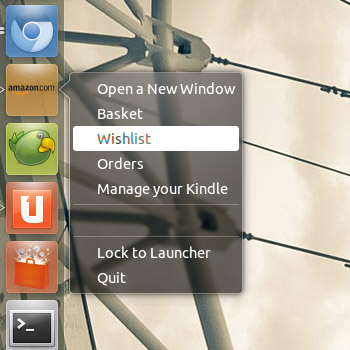 Two web-apps are on-course to come pre-installed with Ubuntu 12.10: Amazon.com and Ubuntu One Music Store.

Their addition is enabled by the introduction of integrated web app support in Ubuntu – an innovative feature that allows websites to “interact” with the Ubuntu desktop.

But the installation of these two web apps on the Unity launcher by default is bound to attract an awkward unease from small sections of users.

Are Ubuntu adding them because they seem them as useful additions for users? Or simply because the Ubuntu project will get a cut of affiliate revenue generated through them?

The answer, I suspect, is a bit of both.

Amazon is the biggest online retailer, and most users will end up visiting it anyway. Adding a handy link in the launcher out of the box will save a number of users a bit of time.

The Ubuntu One Music Store, meanwhile, is a newly launched product in need of a push.

Both the Ubuntu One Music Store and the Amazon web-app link use referral programmes. That is, Canonical get a small % from the sale made through each. This doesn’t cost the user anything extra, but has the passive effect of generating funds for the Ubuntu project.

Not everyone will like the idea. Some may even call it self-interested.

But Ubuntu does have to fund itself somehow, and adding an easily-removable icon that users are free to use (or not use) is, to me at least, a pretty harmless way of going about it.

Don’t want them? Well first they have to land – and that hasn’t happened just yet.

But if/when they do then removing them won’t be difficult in the slightest: just drag and drop the icons to the trash can.