Of all of the Ubuntu App Showdown apps that we wrote about over the last three weeks, none has been as hotly anticipated as Google Reader app ‘LightRead’.

With Unity integration, a slick interface (okay, it happens to resemble Mac OS X RSS app ‘Reeder’, but given the latter isn’t on Linux – and Reeder resembles Google Reader, I’m not bothered by this), and the holy grail of offline reading support, the developers of LightRead have created something special. 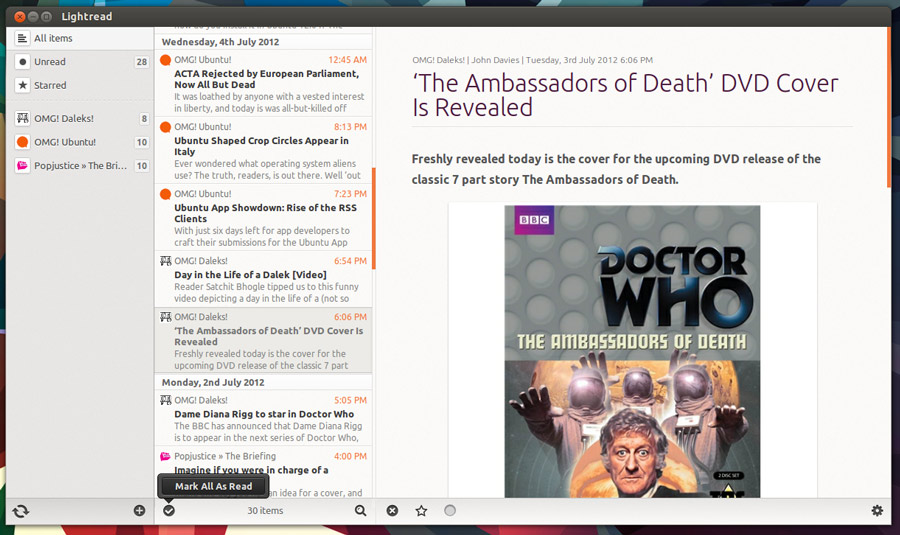 But was Ubuntu really in need of a new RSS client?

Liferea, recommended as the go-to RSS app in Ubuntu, was – and still is – a capable application, but it is not without its flaws. Whether chomping on system resources faster than Pac-man after a week-long fast, or deliberating for a good 20 minutes on whether or not it wants to fetch your feeds; Liferea was the ripest choice amongst slim pickings.

But then Ubuntu launched the App Showdown contest and LightRead was born.

Let me preface my hands-on with this: I am being pre-emptive in reviewing it; LightRead may yet get some last minute bug fixes.

But, for the most part, the features present today are the ones that will be present when it’s added to the Ubuntu Software Center. So your experience will, mostly, match mine.

LightRead is a Google Reader application; you can’t use it without having a Google Account.

On first run you are prompted to enter your Google account details. There’s no distractions here, just a clean login window. 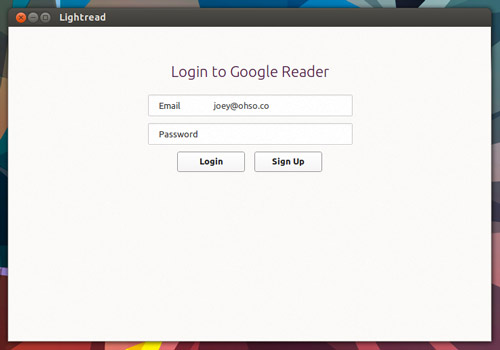 After logging in you’ll arrive at the main view.

From here you can sync your feeds; add new feeds; read items; ‘star’ articles, and more.

Apart from the obvious role of letting you read your RSS feeds, LightRead also sports some tight Unity integration.

What else can LightRead do?

LightRead supports Google Reader folders (sometimes referred to as ‘labels’), even letting you rename them from within the app. It does not, however, let you create or reorder/add feeds within folders. You will need to manage these via the Google Reader website.

Any application worth its salt (rubbish idiom, that) offers some configuration options. LightRead does a commanding job with its default settings, but if you want to adjust the sync interval (it defaults to manual, tsk!), and choose how long to keep starred, read and unread items.

You can also use the settings dialog to log out of LightRead. 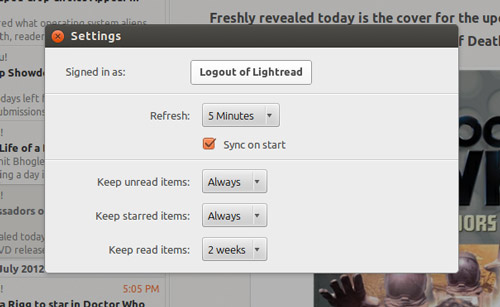 Want to try it right now? You can – just add ppa:cooperjona/lightread to your Software Sources, update, then install the ‘lightread’ package.

If you’re willing to be patient, LightRead will be available to install through the Ubuntu Software Center later this week.

Home » Apps » Is LightRead the Best RSS App for Ubuntu? We Go Hands On…

Jo-Erlend Schinstad Yes and that is great for the Linux economy, because…
Plex’s New Linux App is Available as a Snap
250k 150k 58k 12.2k