When it comes to Twitter applications for Linux it’s fair to say that we are spoilt for choice.

There’s Ubuntu’s default app Gwibber; the webkit loving Hotot; Choqok or Qwit if KDE is your sort of thing; the unstable but awesome Polly… The list goes on.

So does gFeedline, a relatively new Twitter app for Linux, bring anything new to the table? 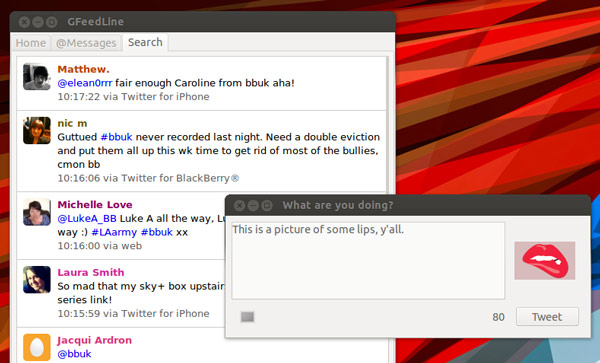 gFeedline is the successor to the minimal, and once promising, Twitter app ‘Twitim’ (which we covered all the way back in Feb of 2010).

But when GNOME switched over to GTK3, Twitm was abandoned in favour of a new, ‘from scratch’ creation called gFeedline.

As twitter applications gFeedline does a little of what you’d expect, but also lacks some pretty ‘core’ features.

For example, whilst logging in with a Twitter account to read your timeline, mentions, messages and other notices is straight-forward, finding the option to directly reply to or retweet a tweet is less so. (Hint: you have to right click on the user’s name.)

The first run of gFeedline is also as odd as the omissions listed above.

After you have authorised your Twitter account with the application you are presented, by default, with a blank empty window. You won’t see anything until you have added streams via the Preferences > Feeds > New dialog.

Despite the limited set of core features gFeeder does offer some options that power users may find handy.

Of these is what I’m budding multi multi-column support.

By tagging user-streams as part of a group you can set up multiple columns containing multiple streams. Streams within a column group can be switched between via tabs placed at the top of the column..

gFeedline is not (currently) available to install through the Ubuntu Software Center but is available as a .Deb installer for quick installation.

This, along with further information on the app, can be found on the project homepage.

cronix91 Need to say you sound like a kid. Quite fun…
Ubuntu Adopts Flutter for Its Future Desktop Apps