Whether you’re writing an essay or a lengthy response to a troll on Reddit it’s important to take regular breaks from typing to help your hands, and keep your mind refreshed and focused.

It’s a habit easier said that done, so making use of a timer app to remind yourself to take a break can work wonders.

DrWright is one such application, and it’s designed specifically for writers.

It allows you to set a predefined work period – say 1 hour – with a set break of your choosing at this time.

How to Install DrWright in Ubuntu 12.04

DrWright is not, for whatever reason, available to install from the Ubuntu Software Center – but it does have its own PPA.

Adding this can be done using a ‘GUI’ but it’s quicker to achieve using the Terminal, so that’s what I’ll walk you through.

Open a new Terminal window (Dash > Terminal) and enter the following two commands separately, hitting the return/enter key after each.

How to Set Up DrWright in Ubuntu

With DrWright fully installed, head to the System Settings.

You’ll see a new entry called “Typing Break” and denoted by a coffee cup icon. Click on this to begin configuring the duration of work time and break-time. 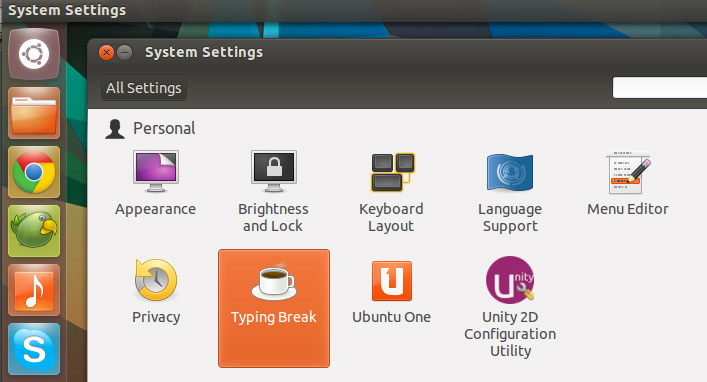 Inside you’ll find just two rows of settings. Use the ‘+’ and ‘-‘ icons to increase or decrease the time intervals.

It’s worth noting that your work interval cannot be less that 5 minutes and no more than 2 hours. Likewise, your break can only be between 30 seconds and 1 hour in duration. 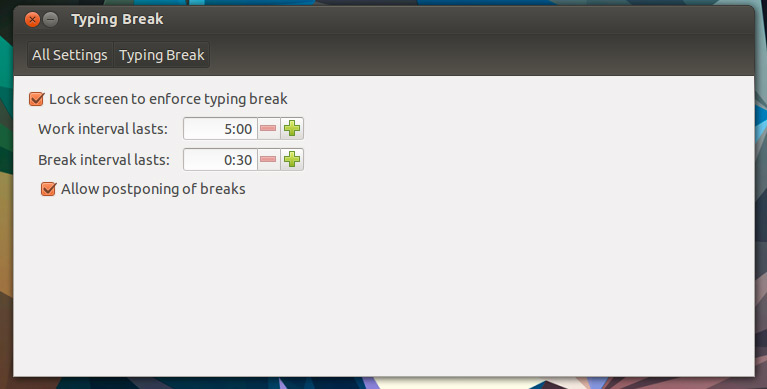 When there is one minute left until your break you will see the following prompt.

The prompt gives you some handy links to postpone (‘cancel’), change (‘settings’) or pre-empt the break and take it early (‘Take break now’): –

When your break time arrives, depending on your settings, your screen will either lock (default action) or a notification will appear to alert you.

As great as DrWright is I have to point out that it doesn’t not have an off switch; so regardless of whether you’re working or not it will tell you to take a break at your set interval, without fail.

This can be pretty annoying – particularly if you’re watching a video, or Skyping.

The remedy? Uninstall DrWright and use something less intrusive – such as a nifty Unity Launcher timer applet.

Rosyidi Alwan Nice. When ubuntu switch back to unity? :D
Ubuntu Replaces Its ‘Disintegrating Installer’ Icon with Something Simpler

Magnus Møller Jørgensen I know, but the electron wrapper imposes something that the…
Discord for Linux Goes Stable, Is Available to Download Now

nathan lee Ok, that is a nice icon. Shortly after the time…
Ubuntu Replaces Its ‘Disintegrating Installer’ Icon with Something Simpler

Ryan Johnson Their installer used to be alright until Fedora 18. I…
Ubuntu Replaces Its ‘Disintegrating Installer’ Icon with Something Simpler

Embridioum Finally! Now I can switch back from Arch. 😜
Ubuntu Replaces Its ‘Disintegrating Installer’ Icon with Something Simpler