If you use any web-apps or websites in Chrome that provide notification pop-ups on your desktop then you’ll know how out of place they look in Ubuntu.

For although Chrome’s notification ‘toasts’ are consistent across all three major operating systems – that is they look and behave the same on Windows, Mac and Linux – they are, unlike, say, Windows, where there is no unified notification system, at odds with the way Ubuntu users are used to seeing their new e-mail, chat or tweet alerts.

For example, here is a Chrome notification on the Ubuntu desktop as it looks by default: 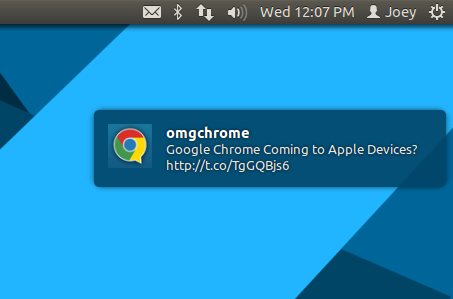 Much better, right? And all it requires is one extension.

The extension, called ‘Linux Native Notifications’, supports GNOME-Shell desktop notifications as well as those used by Unity, and should work on ubuntu 11.10 onwards.

It’s a fork of the now-defunct Chromify-OSD extension by developer Tualatrix Chou.

Just hit the download button below to be taken to the Chrome Webstore listing for the item.

Home » Download » [How To] Make Chrome Use Native Notifications in Linux