How often does your desktop get covered in all manner of – to be blunt – crap?

Icons, images, links, launcher, folders, stuff you don’t even recall ever download… It all gets dumped on the desktop. And a cluttered desktop hampers workflow and distracts.

Enter DayFolder – a small utility that can organize your desktop for you, created by developer Zach Burnham.

DayFolder (link no longer working, so removed) is simple enough to use. It sits in your top panel until you need it. 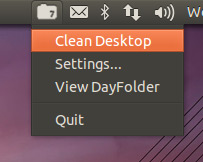 When your desktop gets too cluttered, and you want to organise it, you click the panel icon and choose ‘Clean Desktop’ to have DayFolder group it all up and pop it into a folder with today’s date.

If you don’t want your items grouped in ‘daily’ directories you can choose to have them grouped by ‘week’ or ‘month’.

DayFolder also lets you specify “rules” on which files and placed where.

For example, you can tell DayFolder to move .jpg and .png files to your Pictures folder rather than the ‘DayFolder’ directory. 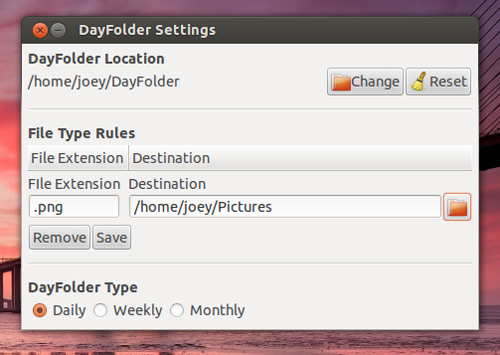 You can add as many rules as you need to, making DayFolder much more versatile than just an automated ‘group and move’ tool.

DayFolder is still in development, and as such the developer wishes us to note that there are ‘kinks to work out’, in particular with panel icons under Radiance.

But it’s core purpose works well and the app as a whole is fairly stable, so if you think it could be useful to you then all you need to know about installing it is below…

A PPA is also available, and can be quickly added by running the following commands in a new Terminal window:

Feedback? Ideas? Share your thoughts in the comments below.

Thanks to Zach Burnham

Home » Apps » DayFolder Organizes Your Cluttered Ubuntu Desktop For You