Millions of Ubuntu 10.04 users will be prompted to upgrade their two-year old OS to that of the newly released Ubuntu 12.04 today – but just how well does such an upgrade go?

In the two-short years between Ubuntu 10.04 and 12.04 an entire groundswell has occurred on the Ubuntu desktop, and in the wider development landscape in general.

A entire slew of features and behaviours that Lucid users will be used to have waxed, waned and then wilted in the light of technical (and design) progress of Unity and its associated technologies.

Most of this stuff is ‘fluff’ for your average user of Ubuntu 10.04. They don’t care so much about what makes their desktop work but rather simply that it does work.

In the past release-to-release upgrades (referred to as ‘direct upgrades’) have been, at best, temperamental. Many of you will be able no-doubt be able to recall upgrades stalling mind-update, resulting in a broken system; logging in to find things don’t work as they should, or that features are missing.

And with an LTS to LTS upgrade – skipping the incremental updates of the three releases sandwiched between them – the complexities are surely even greater.

So how well does it go?

My install of Ubuntu 10.04 is likely typical of most peoples. I’m fully up-to-date with the latest bug fixes and security patches. I have replaced several of the default apps with others of my choosing. I’ve installed some software outside of the repositories (in the form of .Deb files, etc). Theme wise I’ve not done much: I added a different wallpaper and installed some extra icon sets.

But past that it is still identifiably 10.04. The core components – shells, window managers etc – are all 10.04 versions. 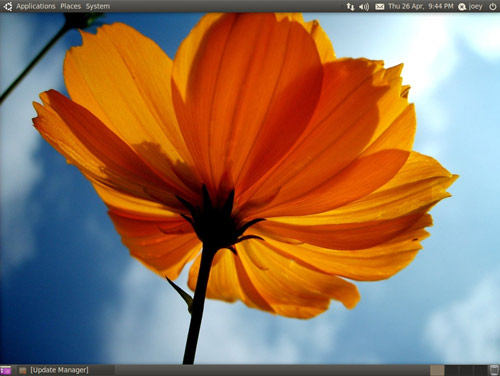 The first step before upgrading anything, LTS or otherwise, is to back up important files and folders. With this done I hit the ‘Upgrade’ button in Update Manager and let it do it’s thing.

The duration of an upgrade is always dependent on how fast your home Internet speed is, and the rate of traffic the server on the other end is getting. Don’t be surprised (or find it indicative) if upgrading on release day is slower than on the second Wednesday of June!

Downloading the updates wasn’t the longest part of the upgrade for me, it was the installation. This took a long while and, unlike a fresh install, there was no slide-show window to brief me on changes and new features I should expect to find after logging in to my upgraded desktop.

Were I not the editor of an Linux-orientated news-site I’d have one heck of a shock after rebooting!

With the ‘upgrade’ part done (slow, but straightforward) I rebooted to see what remnants or issues I would encounter.

The first thing I notice: I have no wallpaper! It’s blue.

All of my custom applications were still installed, as were those no-longer included by default in Ubuntu.

So alongside F-Spot I also have Shotwell, and alongside new e-mail app Thunderbird I retain Evolution.

Direct upgrades have, for me at least, never quite worked as well as I wanted. The cost of ‘in OS upgrading’ was always the speed and fluid experience one gets from a totally-fresh install.

So when I began taking notes for this article I was fully expecting to find this still true. I was expecting visual quirks, broken applications and a handful of conflicting configuration files to cause some curious behaviour.

But in all honesty there is none of that (well, wallpaper aside!). Upgrading from 10.04 to 12.04 doesn’t feel like an ‘upgrade’ in the slightest: it feels like i’ve wiped my hard-drive and started over.

And this is fantastic.

The under-the-hood achievements in not only ensuring that such upgrades go successfully, but result in such a finely tuned desktop shows that Ubuntu 12.04 really does deserve to be titled ‘Precise’.

If It’s Good Enough for Valve…
Read Next