Ubuntu’s offer of ‘Locally Integrated Menus‘ has intrigued many – but how much do you really know about them?

To many they appear to offer a pseudo-compromise between the tidiness provided by Ubuntu’s (oft-derided) App Menu and an atheistically pleasing but easily-accessible way of adding menus back to application windows.

But what are Locally Integrated Menus? And how do they work? The Ubuntu Design Team’s John Lea took some time out to dispel the myths and misconceptions surrounding the forthcoming feature…

Have All The Choices!!1

Locally Integrated menus are just that: menus integrated within the window of the ‘local’ app.

These can be displayed traditionally (think pre-global menu), or by integrating the menu into the title bar of the application window.

Click on the Window Title in the window title bar and the root level menu is revealed as a… menu!

To denote that a menu is available, as not every application has a menu, a small icon is placed to the left of the window title. In testing versions of LIM so far its been this tiny ‘pip’ that has housed the menu, leading many to fear that accessing the menu would need point-perfect precision.

John Lea assures that this won’t be the case: “we wouldn’t make you target such a small area every time you needed a menu.”

“The menu is only revealed on the *release* of a normal click. A ‘hold’ won’t display the menu when it is released, and large pointer movement between the ‘press’ and ‘release’ of the click will similarly stop the menu from being displayed.

However small amounts of mouse movement are tolerated, as there is almost always a small amount of unintentional mouse movement, even in the low millisecond time range between the ‘press’ and ‘release’ of the click.

The result of this behavior is that you can drag the window by clicking on any point in the window title bar without worrying about accidentally revealing the menu.

However if you want to reveal the menu all you have to do is click!”

Before anyone uncovers a nest of angry ants in their pants over LIM be aware that it will be optional.

Ubuntu’s current ‘App Menu‘ will remain default, and the new HUD, should you wish to start using it, is ready and waiting for use behind the Alt key.

If you’re thinking “why not integrate traditional menus into the window title bar?” then you’re not alone. According to John the design team had initially toyed with the idea.

“However with this design you run into a bunch problems with both dragging the window and with small windows.

We went through all the possibilities of how we could solve these problems with things like having a reserved space on the right hand side of the window title bar for dragging, etc…, but this still impacted window management and was a very hackish, dirty solution.

And there was still the problem of small windows.”

Similarly, the notion of revealing the menu on mouse-over was also discussed:

“…this also affected window dragging, and we set ourselves a design baseline of not regressing window drag behavior in any way.

Before you get excited about using the feature you need to know that it won’t be landing in Ubuntu 12.04 – at least not on release day.

Quality issues, unfinished user testing and final design considerations have meant that LIM, for all its shine, just won’t be ready in time for April 26th.

But that’s not to say it won’t appear in Precise: –

“We are looking at options for bringing LIM into 12.04 post-release, but I can’t promise anything yet, and it may well be that LIM becomes a 12.10 feature.” 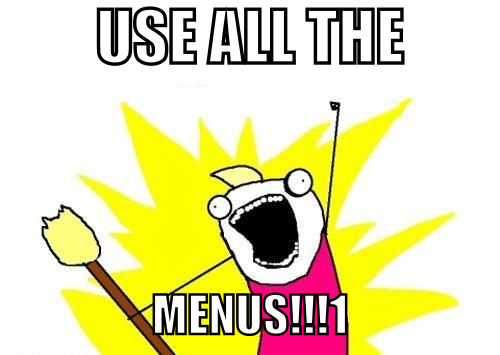 With the HUD, App Menu, and the ability to disable the app menu, one could question the need for LIMs. But this is Linux, and choice is nothing if not its middle name.

What are you thoughts on LIM? Would you use it?