With Santa Claus’ hefty self getting in the way of normal proceedings these last few weeks we forgot to mention that one of our favourite music applications has pushed out a notable new update.

The latest release of Clementine, the Qt music player whose interface was inspired by that of Amarok 1.4, brings a number of new features to the table.

Support for cloud-music services Spotify and Grooveshark has been added (although both require premium accounts to work.) These sit alongside the already-available Last.FM, Jamedno, Magnatune, and more. 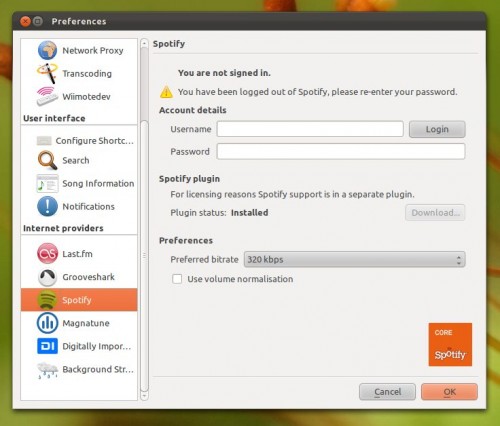 A global search feature lets users search for music content on both their own computer as well as tracks available through connected internet services.

Long-awaited support for audio CD playback also makes its debut in this release.

Full details on what’s new in this release can be found in the change log.

Having not used Clementine for quite a while I’m not best placed to say if these upgrades will make it any more attractive to users than it was previously. But what I can say is that the application continues to impress me with its pacey development and it’s keen eye on providing features that users actually want.

Clementine 1.0 can be downloaded in .Deb format for Ubuntu 10.04 through 11.10 @ code.google.com/p/clementine-player/downloads/list

For users who prefer their updates delivered via PPAs the Clementine Stable PPA also houses the release.