Ubuntu’s plan for a multi-device presence, to potentially include smartphones, has fired up the imagination of users.

And the community have been quick to stoke their creative talents in mocking up a variety of possible implementations.

Nick Rutledge mailed in with a link to his initial designs which are more traditional in approach than some mobile mock-ups that have been bandied around. 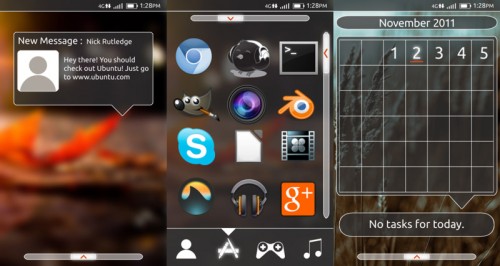 Sam Horne’s mock-ups are ‘Unity-esque’ in appearance, with a strong emphasis given to familiar Unity elements such as the launcher and a ‘Dash’ style search – both of which are played to great use on his home-screen design in particular. “I would like to share with you my own Ubuntu for mobile phones mock-up, just as a way of giving my two cents.” Sam told us when mailing in his designs.

“I gave the design some real thought (even if it’s not a perfect mock-up) to truly show how I’d make the mobile OS. Getting the design right is a big deal in my head, so I used my own HTC Desire to look at them every time I made a change, just to make sure it felt natural or doable on an actual smartphone.”

Serial designer Musl1m took to his DeviantArt with a well thought out, and very Faenza styled, design.

I love the approach to app navigation, particularly in his ‘Ubuntu Software Centre’ design.