Cross-platform ‘Getting Things Done’ app ‘Wunderlist’ is now available for the Linux desktop.

The application provides a minimal yet attractive ‘frame’ for listing, sorting and managing your daily tasks. 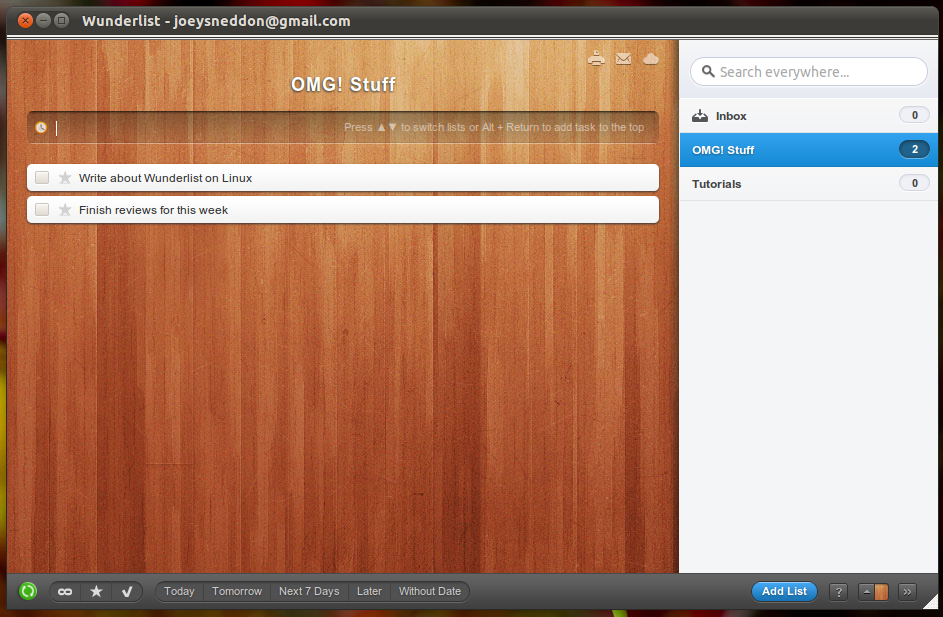 With Wunderlist you can: –

The application can work offline and without an account (just click the ‘No Thanks’ when prompted to log in) allowing you to create, act on, edit and add new tasks without an internet connection. Signing up for a (free) Wunderlist account gives you the added benefit of synchronising/accessing your tasks across Wunderlists various applications (including Windows, Android and iOS.)

Wunderlist has been around on OS X, iOS and Windows for a while now, in which time it has amassed a strong following and a whole heap of praise. Most companies would be content with that; the two biggest players in the personal computing world catered for – so why Linux, and why now?

Writing on the company blog the answer is made clear: demand from Linux users.

“We [listened] to our community, and that’s important for any company. Not just through emails or tickets either, we actively scour the internet looking for pockets of Wunderlist news, and you Linux people have been busy. Many of you have successfully got Wunderlist running on Linux via wine, and we were awestruck at the level of engagement and effort you went through.

The demand was there, so we went ahead and built for Linux officially.”

There’s no denying that Wunderlist sticks out like a sore thumb on the Ubuntu desktop but this is not specific to the Linux client; Wunderlist maintains the virtually the same look and feature set in its Windows and OS X clients, too – and for a good reason: –

“With every platform, we really focus on design. We think Wunderlist is the sleekest task manager available for Linux, hands down. It also brings its incredible simplicity to the OS, so even if you’re a veteran Linux user …or a new adopter, you can start organising yourself right from the beginning – with no time spent learning. “

The application does support Ubuntu’s Global menu, but due to its installation method (or rather lack of) it does not provide Unity quicklist support, an application icon or an entry within the Unity Dash. 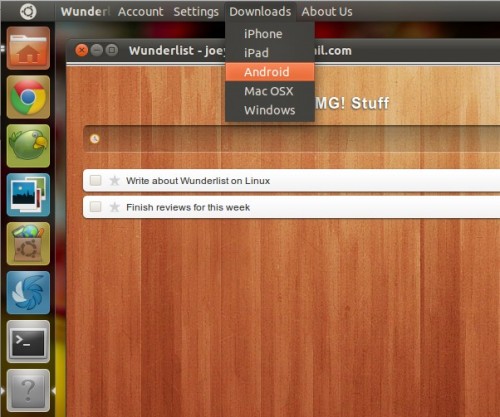 The Desktop application is free for Linux, Windows and OS X. Free mobile apps are available for Android, iOS, and as a web application.

The Linux version of the application is provided as a archived executable (just download, extract, then double click on the ‘Wunderlist’ file inside).

Home » Apps » Acclaimed ‘To Do’ App Wunderlist Comes To Linux

LibreOffice Won’t Ship With Global Menu By Default in 11.10
Read Next