Seeing the Ubuntu logo sailing alongside hundreds of Android App icons in a TV spot for Samsung’s Galaxy S II was a strange, but not unwarranted, sight to begin with.

But Uncle Sammy appear to have had a change of heart; a ‘new’ version of the same advert is running in India with one small difference: no more Ubuntu logo. 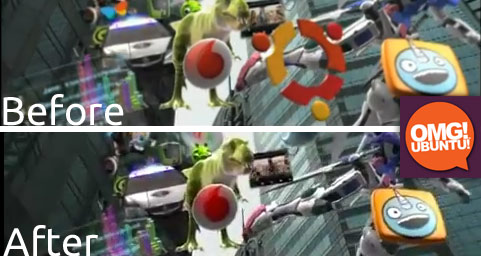 We first wrote about the advert back in early July. The prominence of the icon led us to suggest a handful of reasons as to why the logo was there. Above all it was just a fun little spot; after all it’s not often the Ubuntu logo is beamed across millions of TVs for the world to see!

Over the last week we’ve heard from a number of our readers in India, the territory in which the ad is shown, that a new version of the advert is showing with the only perceivable difference being the removal of the Ubuntu logo from the beginning of the advert.

Anecdotally, Samsung also removed the ‘Ubuntu’ version of the advert from YouTube.

Maybe we shouldn’t have said anything? ;)

Thanks to all who @’d, +’d and mailed in about this