So the long heralded ‘flood’ of ARM netbooks on to the shelves barely even materialised as a drop, with a drop in demand for netbooks and massive growth spurt in touch-screen Tablet devices seemingly diverting attention elsewhere.

PC company Hercules are pinning their hopes on a ‘better late than never’ approach with the launch of a new ARM powered netbook series dubbed the ‘eCafé’. 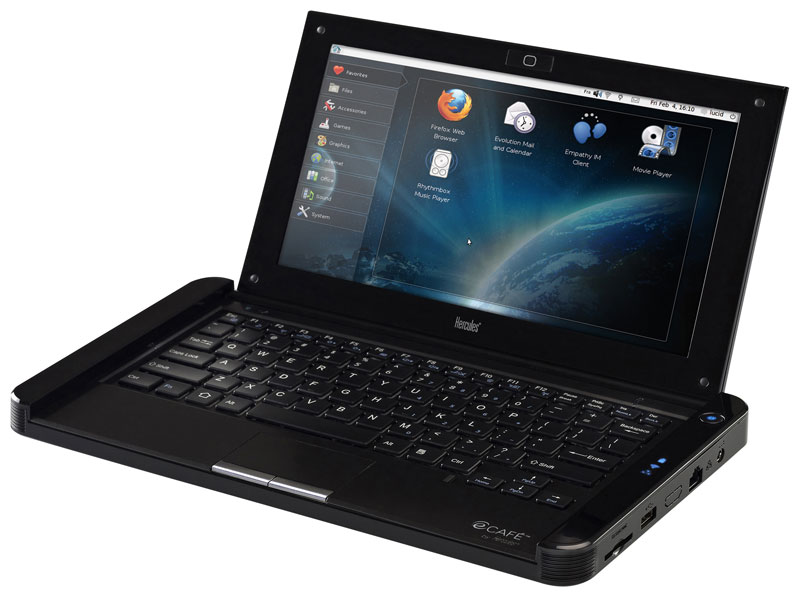 Both sport the same internal configuration of: –

A chiclet keyboard, 8GB of flash storage, HDMI out, 3 USB ports an, card reader, Headphone/Microphone ports, integrated WiFi, Ethernet port and bizarre touch-controls on the ‘arms’ of the device for controlling media playback round out the specs.

The operating system appears to be a slightly modified version of Ubuntu 10.07 (yes, 10.07) for ARM devices, running the EFL Netbook Launcher.

The eCafe models start from £179 on Amazon UK.

Without a device in my hands to put through its paces I can’t attest to the actual performance or power of the eCafé netbooks.

The choice of the relatively antiquated i.MX515 processor – launched in 2009 – would make me hesitant before purchasing, particularly as reviews of Toshiba’s AC100-AU, which shipped with Android, were lukewarm at best – and that came with a dual core 1Ghz Tegra A9 chip!

We’ve certainly seen more powerful ARM portables hinted shown off before – such as this 2GHz 14″ beauty shown off at CES earlier this year.

But the eCafé’s, as small and meek as they seem, are said to handle 1080p video playback, web browsing, office documents and other everyday tasks with ease. And that’s without mentioning the long battery life, claimed 14 day standby, lightweight build and general portability.

The question is: would you buy one?

Robots for Humanity Powered by Open Source
Read Next