‘Nautilus Facebook Uploader’ has shed the shackles of the file manager for which it was originally created and is now a fully fledged application in its own right.

The latest version, released today, sees a number of new features added to the tool, including the option to enter descriptions for uploaded photos; video uploading; the addition of an auto-updating repository for Ubuntu/debian users. Alongside this are speed, stability and general tardiness fixes. 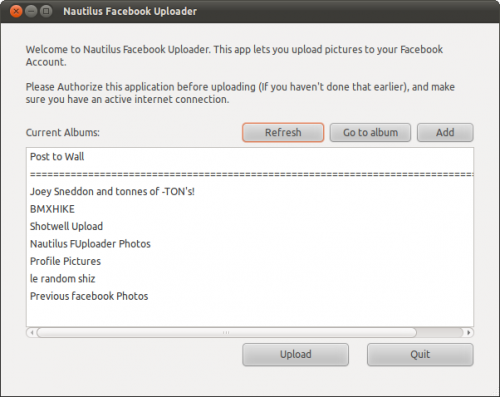 If you’re an avid Facebook user who doesn’t already make use of Shotwell’s Social Networking uploading features then Nautilus Facebook Uploader is a capable tool. Any downsides would focus on the confusing interface as well as the uncomfortable method of Facebook authorisation needed on first run.