It Will be Boring for a While

While there is no exciting new bling to talk about this week, there are plenty of bugfixes to be had for this Unity release.﻿﻿ This week the team welcomes Nico van der Walt as he makes his introduction fixing Bug #731212: “Applications” and “Files & Folders” keyboard shortcut overlays not  drawn correctly with scalable launcher and Bug #741346: superkey shortcut labels does not scale properly. 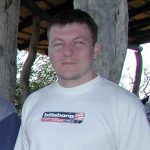 “The Ubuntu community is a big inspiration for me and I love how friendly everyone is. Unity will be a big success and I look forward to being a part of this great Linux distribution.”

Also this week we have Andreas Richel submitting his first fix for implementing a more robust method of launching applications from the home view (lp:730623). Unfortunately his camera is broken so no picture, but he sends along “I’m a 20-year-old German computer science student in my 6th semester. I’ve been passively following Ubuntu and the bug trackers for some time now, but was unable to find enough time to dig into an ongoing open source project. So this really is a first for me :)”

Also back this week are veterans Marco Biscaro and Andrea Azzarone, fixing Bug #742985 ‘Lenses with no shortcut still display black box when pressing super key’ and Bug #741775 ‘Launcher icon progress-bar too big for a 32px launcher’.

These two are like clocks, something landing almost every week!

This week the list is up to 39 bugs, a new high. Now you might be thinking “Wait a minute, I thought all these brilliant people were doing awesome, how can the list of bugs go UP!?!” As it turns out, there have been about 50 bitesize bugs fixed so far (the green line): 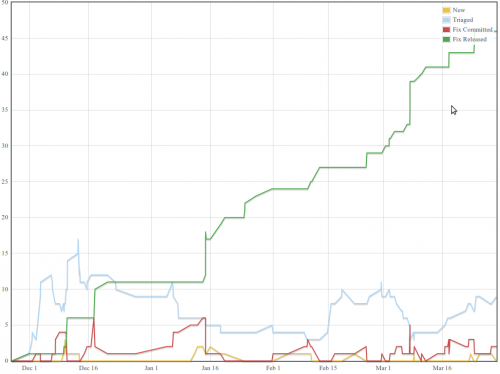 What happens is at the beginning the bugs aren’t really bitesize since a bunch of plumbing work is going on. Towards the tail end as we get towards the polishing phase it’s easier to nick off and fix bitesize bugs, especially as more and more people are able to run it the closer you get to the Beta milestone.

If anything, the list of bitesize bugs will probably continue to grow, especially when Unity goes into another feature phase after Natty. However as you can see the green “Fix Released” line, the number of bugs being fixed also goes up as the code matures and is exposed to more people who want to hack on it. The slow march towards progress continues.

(from the Desktop Team Report)

For people found of the full story, the now classic link: https://launchpad.net/unity/3.0/3.6.8

Here’s the full list if you want to find more, feel free to just grab one, assign it to yourself, mark it in progress and get started.

Remember you can read all of Jorge’s previous Bitesize Bug Reports™ by following the Bitesize tag.