Let me start with a disclosure, I’m a Guayadeque fan and I contribute in the Guayadeque forums, so I cannot claim objectivity.

If you’ve never heard of Guayadeque before, the first thing you probably wonder is how on earth you pronounce it! Just head to this Google Translate page and click on the ‘Listen‘ button to get a good idea.

Once the linguistic issue is left behind, you are probably thinking “Another music player, just what Linux needs!”.

So what sets Guayadeque apart?

It’s stable, lightweight and it can handle huge music libraries.

Not many players can handle a 4TB library and remain usable and stable. According to this user Banshee, Rhythmbox, Exaile and Songbird are not up to the job.

In my experience, Guayadeque uses less memory and takes less time to scan my 19K tracks library than Rhythmbox, Banshee, Exaile, Gmusicbrowser, Clementine and Amarok. And I’m not the only one. 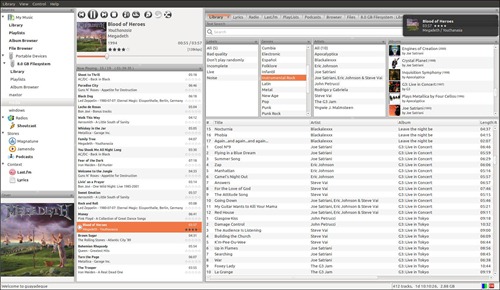 I would say that this is the main reason Guayadeque was created; it’s not something that you can add as a plugin.

The Smart Mode chooses music for you.

Guayadeque has a built-in service that queries Last.fm (even without a Last.fm membership) and recommends songs from your library that are similar to the one playing. Just choose one song (or let Guayadeque pick one randomly) and continue working while the player builds a never ending playlist for you. Warning: once you get used to it you will terribly miss it in other players.

The preferences allow you to configure when to look for similar tracks, how many tracks to add and the number of last played artists and tracks that should not be repeated.

Furthermore, with the Allow and Deny filters you can restrict the songs that are added by saying, for instance, add tracks only from this genre but not if they have been played in the last week.

anonbeat, the main developer, does an awesome job. He is quick to fix bugs and he takes feedback from users very seriously. Of course, it’s impossible to satisfy everyone without bloating the player, but he knows it well and he won’t add a feature if it has a negative impact on performance or usability.

Guayadeque has all the features you would expect from a modern player, a selection of which include:

There are lot of small things that make using Guayadeque a pleasure. I won’t go into the details of each feature, but I’d like to highlight some:

The last.fm tab highlights the tracks and albums that you have and you can play or enqueue them from there. You can also easily look for the YouTube videos, even for the tracks that you don’t have.

Each portable device has its configuration where you can specify the supported formats, the pattern used to copy songs to it, the format and the quality of the tracks, the location and format of playlists, and the name, format and size of covers. So you can specify for instance that when you copy flac files to your PMP they have to be transcoded to mp3 with Very Good quality and the cover has to be resized to a 100×100 png called cover.

In the album browser you can define filter to show for instance only albums that have cover but have not been played in the last 3 days.

In the file browser you can switch between seeing all you file system or just the location of your library.

Despite being relatively new, Guayadeque has already been adopted by two distros, TMLinux and AwaOS, and even by a bar in Berlin.

In mid February, after six months of development, Guayadeque 0.2.9 was released. Besides the usual bug fixes, some of the new features of this release are:

To install the latest official version, use the Guayadeque PPA:

If you prefer the latest development version (if you read a geeky site you probably do!), instead of guayadeque install guayadeque-svn

As I said, Guayadeque is actively developed. The development version 0.3.0  has already added customizable keyboard shortcuts, a more compact album browser view and layouts now save the window size and position. Guayadeque will move to a shorter development cycle, so you may see version 0.3.1 soon.

Other planned features are improvements to the tag editor and to the Last.fm and podcasts panels, and a new ‘Favourite Watcher’ that will recommend songs from or similar to your favourite artists that you still don’t have.

If you have any idea, comment or bug report, you can post it on the forums. You can also use the IdeaTorrent so that others can vote for your idea.