When I was younger my sister and I would spend the weekend recording our favourite songs off of the radio. Now, in the 2000’s, Shoutcast radio stations, flash-streams, mp3’s and webcasts have long since replaced the old wireless — and all the better we are for it!

But if you want – nay, need – to record something from a radio station, a live web-cast performance or some other ‘audio’ event playing on your computer in Ubuntu how can you do so?

As the name somewhat obviously spells out ‘Audio Recorder’ is a small utility for recording audio. It’s able to capture output from your soundcard, microphone, web browser – even Skype; basically if it plays through your speakers Audio Recorder can record it.

If that boast sounds familiar to you then congrats: you have an excellent memory. ‘Audio Recorder’ is the revamped, renamed version of ‘Audio Rec’ – a traditional GNOME panel applet that offered much of the same. With traditional GNOME applets receiving the toe-end of the developer boot in 11.04, ‘Audio Recorder’ has reincarnated itself as an application proper – complete with obligatory with indicator-applet control.

Whilst the feature set hasn’t changed since we last covered the app way back  in the far reaches of yester year, the way in which some of the features are implimented has. The nifty advanced timer – which can be used to auto-record audio at a set time, stop recording upon silence or adhere to a file size limit, etc – is still useful but certainly lacks the user-friendliness of old. Quite frankly the manually-editable configuration file approach used is just too much of a chore to bother with.

Recording can automatically triggered by various Linux music players – including Ubuntu default Banshee – as well as with Skype.

Available for Ubuntu, Audio Recorder can be installed through its own dedicated PPA.

To install via terminal issue the following commands: –

Apps How To audio audiorecorder

Home » Apps » [How To] Record Audio Streams to MP3 in Ubuntu 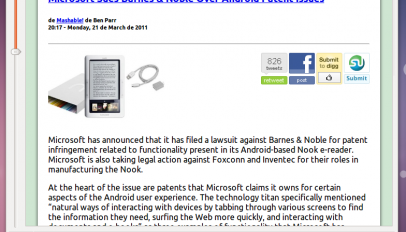 Read-Me: Google Reader app for the Ubuntu Desktop
Read Next