Last weekend I posted a status update on our OMG! Ubuntu! Facebook page asking our fans to leave a comment with their Ubuntu success stories.

A few dozen comments later and we had a nice collection of some stories, everything from people converting their parents to also people replacing Windows XP with Ubuntu on aging school computers in their local community. 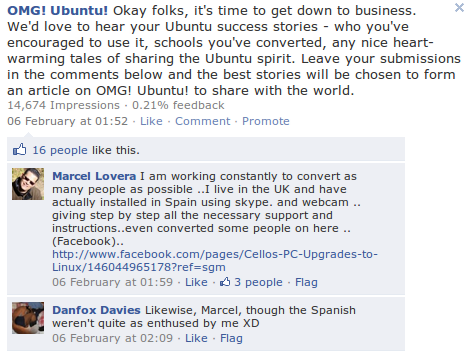 Here are some of stories.

Marcel Lovera said that he’s “constantly [working] to convert as many people as possible” and although he lives in the United Kingdom, he’s been helping his friends and family install it in Spain using Skype and a webcam to provide instructions. Kickass!

Giacomo Colivicchi said that he’s “managed to convert a friend who was a die-hard Mac user” to Ubuntu.

“I’ve been using Ubuntu since its very beginnings in 2004 and been a long time huge fan and promoter of it ever since. I’ve converted many people around me and I’ve also converted 2 computer labs in the school I work for to Ubuntu, replacing buggy XP stations and making some old computers work once again.”

My mother loves it, especially Unity in her notebook.

Melvin Garcia says that he’s converted his whole family to Ubuntu. “My mother loves it, especially Unity in her notebook. I completely replaced Vista on her desktop. I have some friends that have given me their computers to make dual boots.”

These are some awesome stories, and I’m sure there are much more out there. It must be very satisfying for Ubuntu developers and contributors to read some of these tales, knowing their hard work is being put to good use the world over.

Leave your stories in the comments, we’d love to hear them!

Home » Editorial » We asked our Facebook fans what they’re doing to share Ubuntu, turns out quite a bit

Insperatus It is because of their communist system of government. There…
Meet the New Linux Distro Inspired by the iPad