I don’t like showing off stuff that isn’t stable enough for readers to try for themselves, but when it’s an application this good I just can’t resist.

NowSpide is a shiny modern desktop RSS reader in development by Siyan Panayotov, whom many will know as the hands behind lightweight image viewer ViewNior.

The application has yet to make its first release and, as such, is far from being feature complete. What you see beneath presents the work-in-progress as it stands today. More features could yet be added but, by the same token, some might vanish.

Why another feed reader?

Liferea is the de facto desktop RSS reader for Linux but for all its plus points it isn’t the lightest nor most stable of clients. Plus competition leads to choice and, call me a capitalist, but choice never hurts.

NowSpide aims to be a lightweight, modern and handy desktop reader for your desktop. Due to the relative ‘freshness’ of the application NowSpide lacks advanced features like Google Redaer sync, but with the onus on ‘lightweight’ and modern maybe it can live without it.

Once a feed is added and updated items can be viewed in two ways; as they look in ‘feed format’ or viewed ‘in site’. Just toggle the ‘connection’ icon ins the title bar to switch between them: – 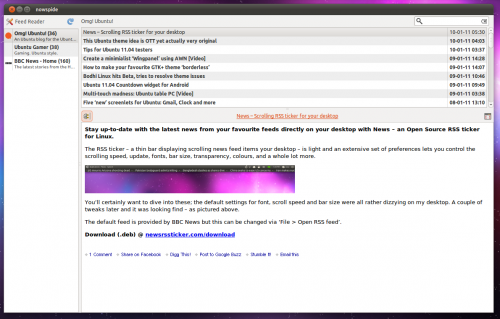 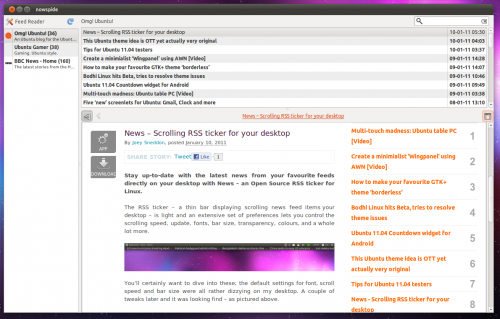 The article ‘list’ is also collapsible, allowing you to reader articles ‘maximized’. Just hit the ‘maximize’ button to toggle between views. 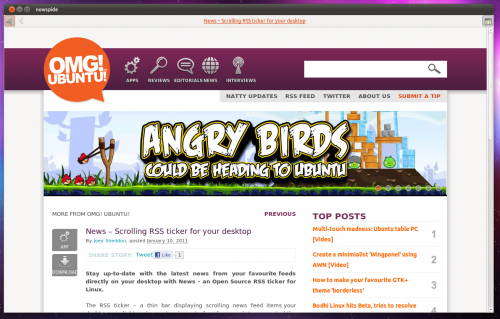 A handy ‘back button’ makes for easy navigation if browsing deeper when in ‘site mode’.

Okay. Here’s how to try it – but bear in mind this isn’t released yet folks!

If installed successfully NowSpide can be launched from Applications > Internet >NowSpide.