Until recently, unless you used a Mac, the popular writing application Scrivener was an app that passed most people by.

In the last few months things have been changing on that front with the launch of a native Windows beta in October which has finally  helped broaden the market for the tool. Better yet this version runs under Wine on Linux – after a bit of cajoling (see here for the how-to on that).

But there’s an even easier solution already available – an unofficial Linux version. 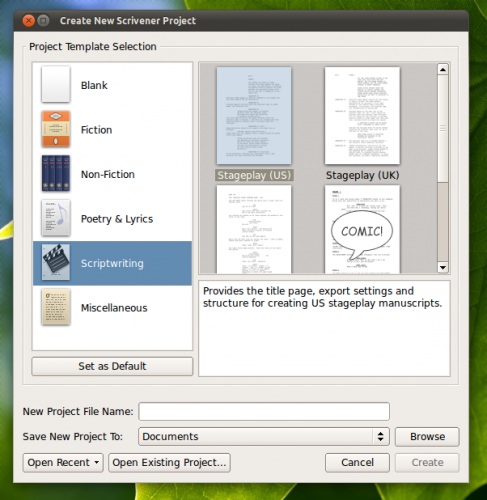 Scrivener is a word processing app designed for writers with a unqiue interface and tool set focused on ‘generating content’ rather than simply allowing for content to be written.

Scrivener isn’t meant to replace OpenOffice Writer for dedicated word processing needs but rather for help in ‘structuring and writing those difficult first drafts of long texts such as novels, scripts and thesis’.

The application is not open-source or free software. Despite this Scrivener is in Beta is free to use with no limitations during its beta phase however each beta is ‘timebombed’ to expire at a given date. The usual cost of a Scrivener license is $45/£31.

Over on the Literature & Latte message boards – the official support hub for Scrivener – a hardy bunch of folks have packaged up an unofficial version for Linux users which doesn’t require wine.

32bit users will need to install both libaspell and libaspell-dev packages before attempting to install the .deb. 64bit users will find things are less straight-forward entirely so may wish to refer to this neat post by David L. Day for an easy ‘how to’.

Robert T. Varga Ah, so you are that type...no intelligence in your shell.…
New GNOME Designs Explore a ‘Bottom Bar’ Layout for GNOME Shell