One of the things I love about Banshee is how easy it is for people to fix their own issues without requiring extensive knowledge.

Recently our community have be joined by two new developers who both started working on their own sexy features. First let me introduce Josh Holland (dutchie on #banshee), who came into our IRC channel one day wondering if Banshee would ever support converting lossless file formats if the device he was syncing to supported these (as Banshee doesn’t by default convert formats supported by your device). 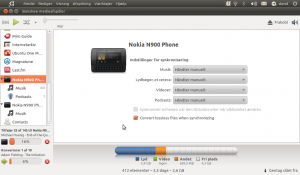 A bug report did exist requesting this feature but nobody had gotten around to implementing it so Josh did what any good person with no prior C# experience would and wrote an initial version.

The screenshot above shows the current state of the feature. However the story does not end there, because the option isn’t placed along with the other conversion options in the device preferences and the feature set needed expanding. Josh is currently working on providing a simple dropdown box to select the format and the policy for conversion, so that e.g. a user could select to keep the current default, have unsupported and supported lossless files converted, and finally forcing conversion of all files.

An early mockup of the final feature for people to visualize the idea: 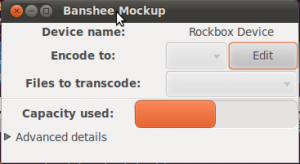 This latter part might seem odd, it would surely regress audio quality however for some devices hardware support exists for some codecs (typically mp3) which allows for highly power efficient playback which is not available for other formats the device might support making this a worthwhile feature which incidentally also has been requested by commenters here on OMG! Ubuntu!.

Josh is working hard on finishing this feature and I would expect it to land in the 1.9.x branch at some point. For now people have to apply the work in progress patch which can be found in the bug report linked earlier.

The second story of Banshee contribution I wish to tell you involves my new close personal friend(tm) ﻿Raimo Radczewski (Reemo on IRC), he also came to our IRC channel, to talk about new shuffle modes since he is a big fan of Last.fm’s similar artist suggestions and wanted to use it to provide a "not-so-random shuffle mode".

Since nobody was actively working on this either, this gifted high school graduate, grabbed his MonoDevelop and unleashed a preview of the feature in the matter of two days. In the process also fixing an issue and adding documentation to Banshee code base which earned him the honor of the first commit on the road to 2.0. As his feature came in the final week of the 1.8.0 release it didn’t make it into the Banshee Community Extensions in time for release, but undeterred Raimo has continued work in a separate git repository and expanded on his work.

While I was writing this, Bertand Lorentz merged Raimos github branch into the Banshee Community Extensions and should thus be at least in the 1.9.0 release (but possibly also a future 1.8.1 release). Users wanting to test Raimos awesome Shuffle by Similar artists can now compile BCE from git.

First get the dependencies:

Then get the current extensions from git using this command:

Followed by our old friends:

Finally, my apologies to Raimo for not including a screenshot of his feature and for the generally crappiness of the first screenshot, I am trapped on a 10" netbook till my new monitor is delivered.