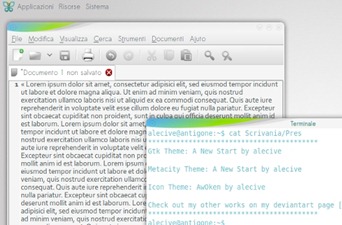 ‘A new start’ GTK theme looks, from the word go, pretty much unlike anything else you’ve tried before.

An aptly titled theme that has that oh-so aloof quality of actually being able to totally transform the feel of your desktop in an instant, it’s one theme worth downloading to see whether it works for you.

The theme package comes with a tonne of goodies including GTK, Metacity, Gnome-Panels, CoverGloobus theme, conky stuff & even a custom Firefox start page with some neat hover-effects.

James Manes Been using this for a while. I love it.
Trim Video Clips on Linux in a Flash with This New GTK App

Carl Draper No Deb version? No thanks
Trim Video Clips on Linux in a Flash with This New GTK App

Per-Annum Bayenhold It can be less than 0 if Wine's implementation is…
Steam Gaming is Coming to Chromebooks, Powered by #Ubuntu