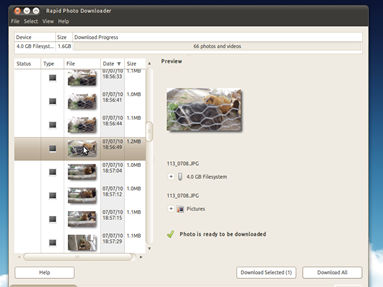 If you have a camera – be it digital stills or digital video – then you know that importing and renaming files is a chore; Camera’s aren’t able to name photos taken at Sally-Sue’s wedding any different than that 30sec video clip of your best drunken Cher impression.

Here’s where Rapid Photo Downloader steps in. Created ‘by a photographer for photographers’ it is able to download photos directly from multiple camera’s, USB sticks & memory cards simultaneously. Couple that with an extensive feature set that takes the pain out of renaming and re-organizing and you have a bona fide winner.

The file names generated by cameras are pretty much meaningless. They might tell you the size, time or date of a photo but they certainly don’t offer up any user-relevant data – and that’s not their fault. Save yourself hours of mundane renaming and organizing by using Rapid’s powerful batch import n’ renaming feature.

You’re able to generate folders for your files to download into and file names based on : –

Backup as you import

Better yet Rapid can also backup your photos and videos to another directory or external device as it imports. It will even use the same folder and file name structures for your backup versions as those saved on your hard-drive!

The app boasts many great features – the application can automatically import on device connection, can unmount devices when done or even close automatically when downloads are completed.

Rapid Photo Downloader supports most regular image formats and many RAW formats including: –

Available for Hardy though Maverick Rapid Photo Downloader is best installed from its PPA.