Gtweety is “yet another” desktop twitter application for GNOME. But does it chirp any distinctive notes  distinctive amongst the chorus of so many rivals? 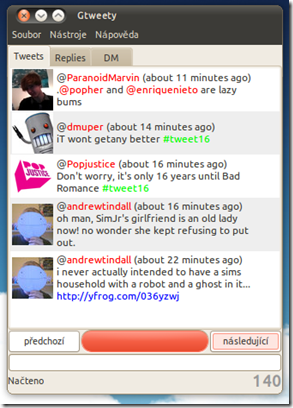 I accidentally came across GTweety on LaunchPad whilst searching for an entirely different project. Reading the application description – ‘Light twitter aplication (sic)’ – my interest was suitably stoked: was it as light as it claimed? How come I hadn’t found it already given that whilst some people collect Stamps, I collect Desktop twitter apps…

Like Turpial was when we first featured it, the application isn’t available in English. gTweety’s interface is 100% Czech but, as with Turpial, this doesn’t impact on usage as much as you might imagine – the UI is laid out in a logical fashion.

On the surface it may seem more than a smidge similar to other gnome-specific twitter clients. If offers separate views for Timeline, Replies & Direct Messages, quick access to updating and the usual notify-osd alerts.

With so many different twitter clients all largely doing the same thing there is precious little for users to base an informed decision on, so small things like gTweety’s use of an Indicator Applet rather than a bog-standard tray icon make the application feel that touch more integrated. It even uses the same ‘broadcast’ icon as the Messaging Menu.

Entering a new tweet is done with from the entry field of the main window or, when selecting ‘new tweet’ from the indicator, a pop up window. Both methods work equally as well and both give character countdown.

Perhaps most notable about gTweety is the ability to fetch/see older or more recent torrents on the click of a button. A nifty trick that means your default timeline is over-flowing but neither is getting access to tweets you may have missed a chore.

Home » News » gtweety – Yet another desktop twitter app for GNOME