Emesene2 has been rewritten completely from scratch to make it it more flexible, featured and extensible. Some bonus niceties such as jabber support, Adium theme support, better multimedia support have been thrown in for good measure with plenty more sure to follow.

I’ve just spent a giant week-shaped 7 days using it and I’m impressed so far. For such an early development version it’s surprisingly solid. I’ll let you into a secret: it didn’t crash once!

Feature parity with regular ol’ Emesene is, of course, not there. You can sign in, change your avatar, chat, customize a few things here and there but  the bells, whistles and webcams you’re used to won’t be arriving for a little while yet. The few plug-ins on offer did all work though and, UI wise, the application is looking pretty spiffy. I love the ability to use Adium message styles in particular. The indicator applet deserves a bit of mention too; it now shows status menus AND, awesomely, a contacts menu too. Want to start a chat with Joe User? No need to call up the whole app, just use the menu. Keyboard-chained shortcut fanatics will love the fact you can now just use your keyboard to do so if you really want to! 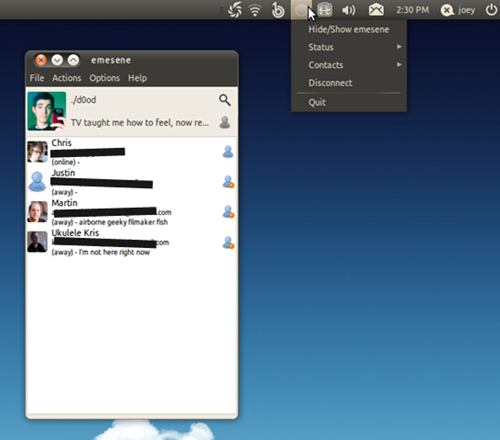 Don’t install without thinking about what you’re doing and any resulting inaptitude on the applications’ part. Installing the development version of Emesene 2 requires the removal of regular Emesene due to conflicting files etc.