A few days back I received a question from reader Nikos – who broadcasts a radio show @ http://www.poplie.eu/. It read: –

I would like to run ubuntu for my station. For the time being  i am using SAM broadcaster on winxp but since my laptop runs ubuntu, is there a similar programme so as to stream music on line? i don’t want to run wine or virtual box, i would prefer some software designed for ubuntu.

thanks in advance,  Nikos

IDJC comes with most features you’re ever likely to need. This is coupled with an incredibly straightforward and intuitive interface. 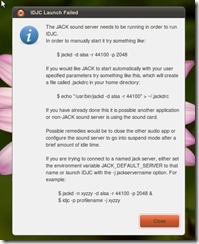 So far so good, right? Well…

*IDJC is almost too good to be true because it has a well-earned reputation for being a darn headache to get up and running. Make friends with the screenshot on the right because you will likely see it a lot during initial attempts to get IDJC up and running…

Guy Clark Who said anything about views. Aside from the secrecy that…
Shortwave 2.0 Released with GTK 4, Slick MiniPlayer Mode

JustPerfection This t-shirt only last 9 months. After that you don't…
Ubuntu 21.04 ‘Hirsute Hippo’ T-Shirt Now Available to Order

JustPerfection Well, that could be a great Ubuntu wallpaper without that bow tie :p
Ubuntu 21.04 ‘Hirsute Hippo’ T-Shirt Now Available to Order