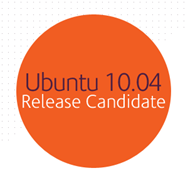 The Ubuntu 10.04 Release Candidate has been made available for download.

This release candidate is the final official “testing” version of the Lucid cycle and presents the last chance to spot any show-stopping bugs that might crop up between now and next Thursday when the final release is due.

Users should be aware that the release candidate is pretty much visually identical to the previous beta release. Users of the Beta who have remained up-to-date with updates already have the RC.

So what’s changed? Under bonnet the OS has received many bug fixes since the beta, Nvidia users can enjoy a slightly more acceptable boot image and, as usual, many applications have been upped to their latest revisions.

Be sure to check out the list of known issues prior to installing.

The Ubuntu 10.04 release candidate can be downloaded from the following links. Where possible users are encouraged to use the available torrent.