There’s an old saying “Use the right tool for the job” – common-sense advice that applies to pretty much any situation – especially in Software. But what happens when the ‘right tools for the job’ don’t actually exist?

The Ubuntu Manual project faced such a hurdle when thinking about screenshots for the user-friendly guide. Despite only 30 screenshots being used in the manual, the 40+ languages the manual is translated into all require native-language screenshots – 30 x 40 = 1200. Over a thousand screenshots have to be taken – and all at the latest possible date to ensure accuracy with the final release.

“The more people working on it, the less efficient it is. It becomes harder to teach them all the correct way of doing things, and the likelihood of errors increases.” Benjamin Humphery, Manual Project leader, states on the QuickShot wiki page. “1200 screenshots that would otherwise manually have to be captured, cropped, resized and set to the correct dpi – then uploaded into some sort of consistent and organized structure.”

His solution? Create an application that automates all of this repetitive and potentially error-prone task. That application is called QuickShot. 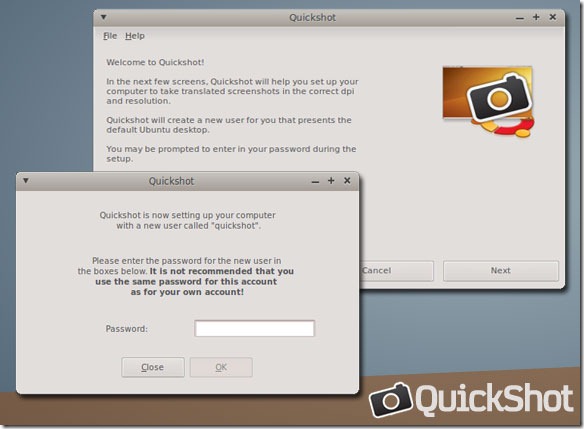 “Quickshot is a python program designed for capturing a large number of screenshots in different languages.” Benjamin told me when i enquired more about it. “It’s principally designed for use with the Ubuntu Manual Project, but should be able to be tweaked for different projects and uses.”

The most amazing aspect of all of this is that QuickShot existed solely as a sketch 3 weeks ago.

Once a user opens Quickshot they create a new user account. They login to this account and the current database of screenshots for the manual is then downloaded. The application then informs the helpful soul of what screenshots still need to be taken and a detailed breakdown of what specifically needs to captured in that shot.

Once the user if ready to go the application auto-changes the language needed for the shots, takes it and then uploads back to the database.

QuickShot is progressing a steady pace but any extra help would be greatly appreciated by the Manual team – So if you’re a python whizz and want to earn some brownie points (is that a British saying?) then head on over to launchpad.net/quickshot and muck in.

To check out the progress so far (and hack on it) grab the bzr branch using: –

Home » News » QuickShot – from a sketch to an application in 3 weeks.