UPDATE: I’ve added in “Fixed!” where things are fixed, and “Probably won’t be changed” where it’s more than likely nothing will be changed.

In this post I’m going to list 16 things that I think could be improved in Lucid. I’m going to try my best to address the issues in detail and offer solutions. Of course, all of this is also a matter of opinion too. The object of this post is to make you think about ways we could improve each one. I’ll try to link to bugs where there are bugs, but a lot of these are quite new design decisions only present in 10.04 and hence don’t have bugs filed.

All of these screenshots were taken about two hours after I installed Lucid Lynx alpha 3, daily build from Saturday March 6th 2010. Read: after the UI freeze.

There are two things wrong with the new window controls in the Lynx.

Firstly, the controls are on the left. This is bad because:

Secondly, the button order has been shuffled around so that maximize and minimize are swapped. This is bad because:

It is also pretty obvious that people don’t like the change:

Of course, if the design team consulted the community or conducted any research whatsoever before deciding on this, they would have already realized it’s a bad idea.

To see more on why moving the window controls to the left is a bad idea, read this post.

This bug has been around since Karmic alpha, and just appears to be gathering dust. It affects a tonne of non-default applications that users are likely to try out, such as Pidgin, Banshee, VLC etc.

Basically the problem seems to be that certain applications aren’t appearing in the panel with transparent backgrounds, even though they have transparent .png images in /usr/share/pixmaps and the like.

I have noticed that it’s fixed when using Clearlooks, Kin, Homosapien or Turrican. So it’s obviously a theme thing – why the “professional” default themes have this bug but community themes don’t is beyond me.

This is the reason I switched to Banshee. Even though I have ubuntu-restricted-extras installed, Rhythmbox prompts me to install plugins pretty much on every second song. It does it all the time when loading my collection into the library. I have all the gstreamer plugins in the world, but it still won’t go away. The silly thing is that it actually starts playing the song that it apparently can’t play, but when you click cancel it skips to the next one. Searching for plugins never returns results.

Also, note how crappy the close button looks on windows such as this that don’t have maximize and minimize options.

The black box around it is actually part of it – I didn’t put that there. Why this progress bar isn’t nice:

I am going to assume that this will be fixed at some stage in the next few weeks.

This one has been talked about recently on Planet Ubuntu. I don’t care what anyone says, having some icons here and no icons there just looks inconsistent. You either have to have them all or have none at all, you can’t have a mix of both. Especially now that there are huge gaps in menus where icons look like they should be – it appears to be a bug and has actually been reported as a bug many times.

If the GNOME developers *have* to take away the icons by default, they need an easy way for users to put them back in. An easy way is not a gconf key. An easy way would be an option in “Appearance Preferences.”

Once again, another odd design decision that just screams unprofessional. The checkbox is floating in a random column on its own, but then the icons are in another column?

I would love to know the design reasoning behind this.

The notification area now takes up almost 1/2 of my 1280px wide top panel. For those of us who don’t like having two panels and want their window list up the top, it leaves hardly any room to show open windows.

Just look at the spacing around the Rhythmbox icon, you could drive a bus through there!

The current panel spacing is bad because:

Another thing that’s bad about this new notification area is the fact that each item isn’t an individual applet. For example, say I want to remove the Messaging menu because I don’t like it or don’t use it. This is actually a fairly plausible scenario, many people don’t use Evolution because they prefer webmail services such as Gmail. Also, many people use Pidgin instead of Empathy because, well, because Pidgin is just better. So in this scenario, pretty much 75% of the functionality of the messaging menu is now useless.

My only option is to remove the entire notification applet, so I lose Rhythmbox, the battery status indicator, and the volume indicator. But for some reason the wireless applet is separate.

Solution? You could either separate all of the applets into individual ones, but I think the best way would be to group them into “system status” and “applications.” For example, in the “system status” applet you could have things that tell you information:

And in the “applications” area you could have a tray like section that has stores the icons for applications:

It’s about time that Ubuntu changed the default font size from 10, 96 dpi to something a bit smaller. I use size 8, 96 dpi with Sans and it’s perfectly legible. Having a gigantic font size suggests that our operating system is a toy for kids.

“The effect of having the font so large is evident from the outset – menus appear never-ending, dialogue windows seem disproportioned and the entire feel given off is that of a toy.”

Here’s stock Firefox with with ascending font sizes. Notice how much more room Firefox has with 8px – practical for netbook users, no?

Also, the default pointer? Why is it still set to DMZ (white)? That is so Windows 98. Whiteglass is a much more acceptable pointer and fits with the new theme a lot better.

Images and some wording taken from omgubuntu.co.uk with Joey’s approval, see this article for more information on fonts.

This should launch System Monitor, instead of logging you out. The rationale is that Windows users coming from Windows to Ubuntu will instinctively hit Ctrl+Alt+Delete when something goes wrong, which will bring up the shutdown/logout menu. They wouldn’t have been expecting that.

The solution would be to assign another key combination for log out – or just have no key combination at all because it’s easy to get to the log out option by just clicking on the panel applet in the right hand corner.

Then you could have Ctrl+Alt+Delete launch gnome-system-monitor by default, which is the Ubuntu equivalent to Task Manager on Windows. Here, users can kill processes that have frozen. Even for non Windows converts, it’s a useful tool to have set as a keyboard shortcut.

Pidgin should minimize to messaging menu, instead of closing

Why does Pidgin close now when I close my buddy list? It should minimize to the messaging menu like Empathy does. It is possible to enable the tray icon so it closes to the tray, but that looks ugly due to the transparency bug above and the inconsistent notification area spacing.

Computer Janitor should not be in Ubuntu

Not only does this program destroy your system by removing dependencies and third party software that you’ve installed from .debs, but it also looks hideous and unfinished with incorrect padding and missing sections.

The entire program isn’t clear on what it’s supposed to do. Not only are the section titles wrong (see below), but even the name of the application is wrong.

Secondly, “janitor” is rarely used outside the United States of America, down here in New Zealand we use “cleaner.” I’m pretty sure “janitor” wouldn’t translate that well either. Try translating an American word like janitor into Hungarian, Chinese or Arabic for example.

Another thing that’s wrong with the naming is the section titles. Pretend you are a new user:

This application needs a tonne of work before it’s up to the standard required for the default install, and I honestly think it is dangerous to have it available to new users and it should be removed from Lucid immediately until it’s ready.

I suggest it’s renamed to “Package Cleaner,” removed from Lucid, and re-targeted to Lucid+1. The concept is good, but the execution is terrible.

How are we ever going to sell Ubuntu as “easy to use” when the default preferences menu is bigger than most screens!

This menu needs a serious clean up and half of the stuff could be merged.

Or you could just use the Gnome Control Panel.

This applet now looks a lot worse than the Karmic one, in my opinion. Why?

To be honest, this applet does nothing right except change your volume when you move it. In fact, with this track record, I wouldn’t be surprised if moving the slider to the right actually decreased the volume!

Here’s an image that illustrates the proportions of the applets. Click on it for a full size version. 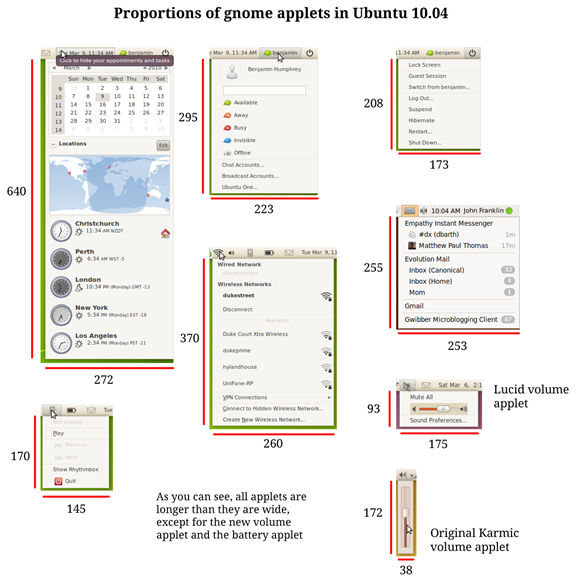 What happened to the nice battery stats window?

There used to be a nice little UI window that would pop up when you clicked on the battery name in the applet. I don’t have Karmic installed anymore, so I can’t show you. But it was nice, trust me. Now you get this:

This information is cool, but the average user doesn’t need this amount of information, they just want their battery to be able to work, and they want to see how much time they’ve got left before it runs out. Perhaps they’ll want to know what the model number is if they need to replace it at some stage – but that’s it. Especially when half of the information reported is incorrect. I wish my battery lasted 12 hours.

MeMenu doesn’t pick up the image from About Me Fixed!

When you click on the picture in the MeMenu, it opens up the “About Me” application, implying that it takes the image from there. You can fill in the details and choose a picture, but the picture won’t be displayed in the MeMenu – even after a restart.

Oh and once again, note how fantastic the new theme window controls look when their isn’t a maximize option.

MeMenu text box doesn’t explain what it does

Okay, you got your new user shoes on again?

As a new user, please tell me what the text box does in the following image:

If I was going to take an educated guess at what you thought, it would be that the text box updates your IM status, because directly underneath it is a list of IM statuses. Right?

Wrong. It actually updates any accounts you have set on Gwibber. In my case, Twitter and Facebook. What happens if the user doesn’t have either of these?

Also, broadcast accounts? What are we, a radio station now?

Thanks to Benjamin for allowing this post to appear on OMG! Ubuntu!