The half-hour class really showed off Lernid in all it’s currently glory and really opened up eyes to its potential.

10 minutes before the class started a notification bubble appeared reminding me. A really nice touch that will no-doubt ensure plenty of people get to event classes on time!

Upon joining an event you’re presented with a list of upcoming sessions, all of which are displayed in local time. Yep – local time, no more faffing around trying to fathom out what UTC is in EST, etc. All right there for you.

Initially impressive!
The first “wow” came as the session got underway with a presentation slide automatically appearing in Lernid. A fantastic inclusion that Jono himself was proud of, saying:

For the first time in any of our learning events, we can now display slides this makes sessions much more interactive and feel more real 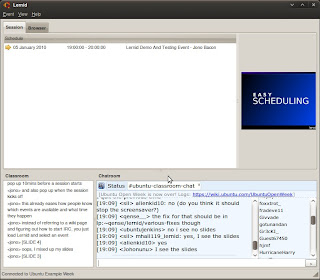 Still Impressive
It’s somewhat odd at first watching an application “work” by itself; especially as websites auto-loaded and navigated inside Lernid, and the application tabs were auto-switched between on-call – all with you sat staring at!

All websites “used” in a presentation are available to visit again the dropdown box in ‘Browser’ view. Again, a really useful touch.

Other intentions past that are to turn the IRC chatroom section into an IRC widget – as with the classroom pane and include a “presenter mode” whereby presenters can write up their session before hand and simply press a button to send each line as and when needed.

Thirdly he wants to create a feature whereby questions asked in the IRC (via the QUESTION lines) are ‘sucked out’ and presented as a list, making it easier for the presenter to read and respond to.