Pino is a new-ish Twitter application for Linux with the moto of being “easy and simple” and “fast.”

I couldn’t get the ruddy thing to compile back when i reviewed 6 Linux Twitter applications, but having just gotten itself a PPA for super-easy installation in Ubuntu it’s time to see what Pino is all about…

Options are on the brief side allowing you to enter an account, specify the update interval and toggle notifications on and off.

The status update box shows when you press the ‘pencil’ icon. Perhaps annoyingly to some it is only one character tall.

It also has a handy character countdown on the right hand side.

Only two viewing modes are currently available. These being your own timeline and ‘mentions’ @ you. Both of these modes do display a good amount of tweets – around 20 or so – but there is no option to get “more” and view further back.

Whilst there is a ‘Reply’ button on tweets, allowing for quick @’ing back, there is no retweet button. Annoying. 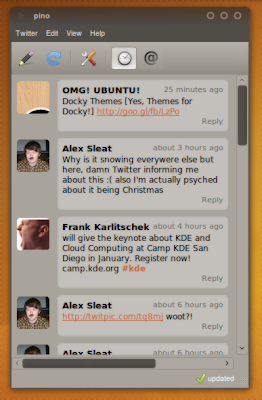 Also lacking is a search function or a viewable public time-line. I personally find public time-lines to be pretty irrelevant anyway so a better solution would be to display a list of trending topics – now that would be useful!

Pino does do somethings right in this release – namely the tray/application icon. It’s a sleek monochrome Twitter ‘T’ !

Official Feature list
The full list of features Pino boasts, shamelessly copied-and-pasted from the official site – are as follows: –

Conclusion
I will round this review off with a very a ‘but’, because despite Pino being somewhat basic in terms of interactivity and immersing yourself in
twitter but it does describe itself as simple so this isn’t necessarily
a negative.

It’s a fair effort and it is only in beta – but it’s dwarfed by equally-as-simple-to-use applications but with better feature sets.

Installing Pino
PPA time, kiddies. The Pino PPA doesn’t contain anything but Pino so you don’t need to freak out over any conflicting app updates.

is all you need to whack into the terminal, followed by an update and then

No truckloads of dependencies are required for Pino, so it’ll be installed within seconds.