One of my favourite twitter clients available on Linux is ‘Qwit’ – a qt4 based Twitter applications with a ton of features baked in such as twitpic uploading, URL shortening, contact management & more. 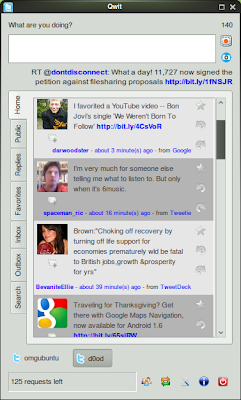 Qwit was the winner in my “6 Linux Twitter Apps Reviewed” article a month or so back, and i’m still using it!

Today sees it get a shiny new PPA for the development version! I’ve been using the beta for a while now and it really is a fantastic improvement on an already-fantastic application.

You can add the PPA to karmic via a terminal with one command: –