Skip to content
Adobe have today made available a Beta version of Adobe Air 2. 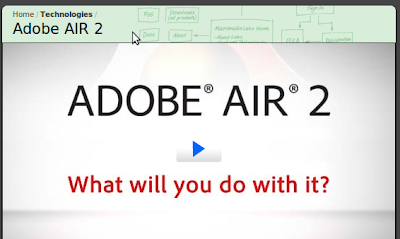 New Features, Better Capabilities
New features that Adobe Air 2 brings with it include: –

The Linux installer versions are provided for a variety of distributions. This is a great improvement on the single .bin file users were given before. The amount of choice is a joy to behold – it even comes in .deb!
You can get it @ http://labs.adobe.com/downloads/air2.html

Samples
Once you’ve download the Air2 beta and installed it, check out some of the Air2 samples provided by Adobe @ http://labs.adobe.com/technologies/air2/samples/


Old Apps Still Run
Running older apps in Air2 should, in theory, be fine. If there are quirks then it may be down to the beta nature of Air rather than any missing, replaced or regressed code.
64bit no-show
Although the .deb provided is for 32bit only, there is an interesting pop up if you try and install it on a 64bit system informing you that Adobe Air works relatively fine but needs some extra libraries to run. It then points you to the following webpage: http://kb2.adobe.com/cps/521/cpsid_52132.html
SEE MY PREVIOUS POST ON HOW TO EASILY INSTALL ADOBE AIR ON X64bit UBUNTU HERE.
Article originally appeared on omgubuntu.co.uk
air2