There are quite a number of different twitter clients available on Ubuntu. I decided to try some of them out and find a favourite…

There are a few key things i look for in a twitter client.

If i have something to say on twitter the chances are i want to say it quickly. Having to trudge thought menu’s or manually extend a field box are petty annoyances.

Tweets should be displayed in the main window and come with options to reply, retweet, etc.

Not as important but if i want to find out news or views on a topic, it’s much easier to do it in a twitter client than to open a web browser and navigate to twitter.com

Although not a deal breaker it’d be nice to find some useful extras integrated in some of the apps, such as twitpic uploading, URL shortening and perhaps “view” filters to see my @replies and direct messages.

The Apps
I shall be reviewing 6 native Linux applications and awarding them scores out of 5 based on their ease of use, features and whether they conform to any of the ‘pet peeves’ listed above.

You will find download links/installation instructions at the very bottom of the article.

The developers call gTwitter “simple” and they’re certainly not lying. 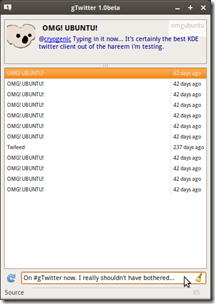 As such, there’s not an awful lot to say about gTwitter other than it’s functional. At times it does seem slow to update and re-populate tweets when clicking on the refresh button. Submitting your own won’t show up until you hit refresh, either.

It has two main “view modes”. The first shows you a list of user names and when selected the corresponding tweet in a topbar. (See picture above.) 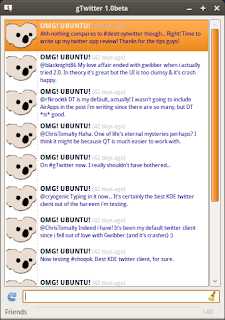 The option for tweetview is hidden; you’ll find the option in what doesn’t appear to be a menu at all on the footer. Right click on “friends” in the status bar and you’ll find it! 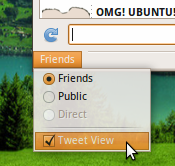 You can set the refresh/update speed (default is every 5mins) via the preferences menu.

A bit too basic for anyone with more than a passing interest in actually using Twitter, so I have to give it a slightly miserable: – 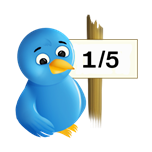 The first KDE app on our list and boy does it attract your attention! 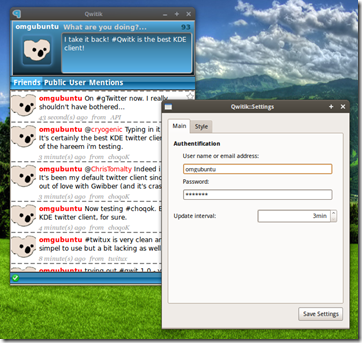 I like the large input area and the countdown above to it – very useful. The ‘update’ speed seems quick and your tweet shows up in your own timeline almost instantly.

The tabs under the input box let you navigate between different filters; much better than having all of them flood the one view.

Preferences’ wise lets you set the update speed and change the colours your tweets are displayed in etc. Nice additions to a nice client.

It gains lots of points for such an “instant” interface and those handy filters. The extra’s almost clinch it, but it’s not quite “perfect” partly due to the way-too-colourful interface! 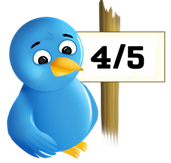 One of the oldest Twitter clients on the list. I remember freaking out about it when first released almost 2 years ago!

At the time is seemed awesome – especially being a native Linux app and not Adobe Air-bound – but since then it hasn’t really evolved much… For better or worse. 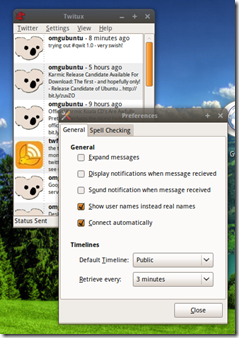 The first thing i notice missing is listed on my ‘pet peeves’ list at the start of this article: No visible input box. To tweet you have to go to the ‘twitter’ menu and choose ‘update’. This open up a separate window for you to fill with tweet nonsense.

You choose between your own timeline, friends timeline or the public timeline, but it has no search option. 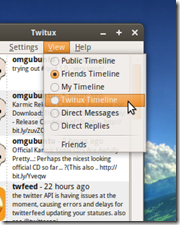 It has the usual settings such as refresh speed, but a helpful spell checker, notification alerts and more are also included.

I want to love this more than i should, but at the end of the day ‘basic’ covers it. The Gnome integration is a nice touch, so i’ll be kind and give it: – 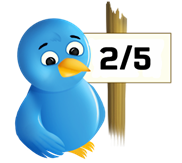 Probably the best known client on this list, Gwibber is much more than just a twitter client but i am purely reviewing it for it’s twitter support and NOT any other service. So don’t hate me for not mentioning that it supports Facebook or Flickr or whatever.

As i said to some omgubuntu twitter followers earlier – i had a love-in with Gwibber for a long time. No mistake. Sadly i feel version 2.0 has gone awry for a variety of reasons – not least of which are the clumsy interface and crash-happy attitude.

When viewing ‘just’ twitter, the interface is pleasant and straight-forward to use. The search box can be ‘stretched to a larger height or be collapsed completely. A small countdown in the status bar helps you keep track of characters remaining. 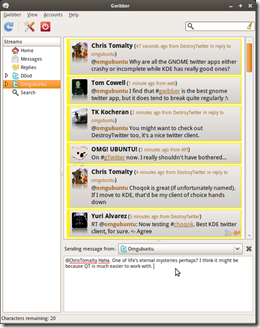 Like other applications Gwibber, too, has my much vaunted ‘intweet’ options supporting re-tweet, reply and direct message.

Filter views are available via the side-bar ‘tree’.

You can set a default refresh period or manually invoke one via the toolbar button.

I want to love Gwibber as much as i used to, but it’s just not the best applications for twitter anymore. Perhaps once it stops crashing or refusing to connect so much it will rightly-so raise in peoples estimations. 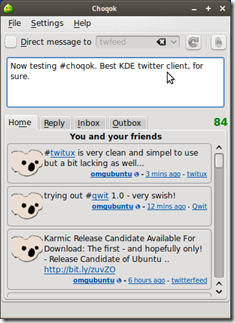 Once again it has a nice, spacious input field for your tweets and a handy countdown.

A feature of Choqok (which means Sparrow in ancient Persian) I really like is the direct message feature. Most clients on this list don’t have this so it’s a very welcome addition – along with the ‘inbox’ tab that shows you your direct messages.

It boasts a “Quick Tweet” view (a cut-down mode) for just tweeting.

And it has search, auto-shortening of URL’s, notification support, appearance tweaking…

Sadly it has one incredibly annoying feature – “Now Listening”. If you listen to a track in Amaork it will automatically tweet it. Spamming your followers with an update on every track you listen to is not cool and is a sure fire way to lose a large chunk of them…

Almost a five, but lack of GTK support and that blaster Amarok spamming lets it down.

The last KDE app on the list and yet another winner!

The interface is unique yet is a joy to use. 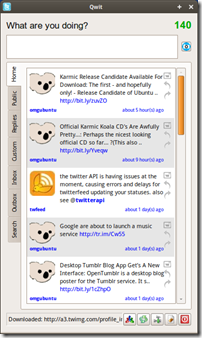 The nice large input field and countdown with a really useful ‘twitpic’ uploader next to it! Click it and it will upload any picture from your computer to twitpic and insert the relevant link. Sweet!

The view tabs on the side are very useful and varied in filters. You can set up a ‘custom’ view for favourite searches – say mentions of ‘omgubuntu”‘ perhaps!? I kid, but it saves you needed to manually search for a specific topic again and again.

You can easily respond, message or re-tweet thanks to the ‘in tweet’ options.

Qwit’s preferences must be on steroids or something because there seems to be no-end to the options available! 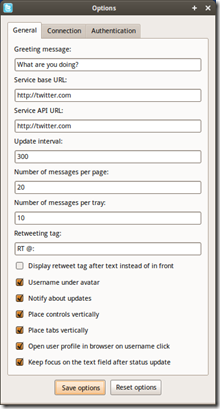 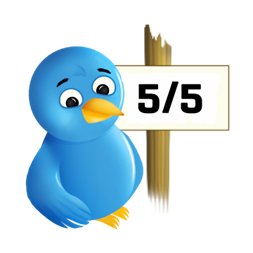