Conky is a great way to personalise your Linux desktop regardless of which distro or DE you’re using.

There are hundreds if not thousands of Conky themes available, ranging from simple stat tables to Lua-laden masterpieces. I recently came across a new Conky config I like. It shows the date, current weather conditions, an average CPU and RAM load, and the currently playing song in MPD.

I figured I’d share the theme on here and add a bit info on how to customise this Conky to work with your location and any MPRIS-compatible music player, rather than MPD. It requires a fair bit of directory swapping and file editing, but the end result is a setup that’s mostly usable.

Note: this is not an article on why you should or shouldn’t use Conky versus anything else. Some people don’t see the point of conky (it’s on the desktop, which is mostly hidden) whilst others, myself included, don’t mind a bit of eye-candy for eye-candy’s sake.

Closebox73 makes some of the best Conky themes around.

Indeed, if you’ve seen a Conky on my desktop in screenshots from the past year or two there’s a very good chance it’s by this designer. I highly recommend checking out their full range of Conky themes on GitHub if this post leaves you inspired and wanting more.

Chertan is their latest creation. It’s a simple set of four circles positioned in the middle of the screen, generated by two config files (the second containing the Lua magic that draws the dynamic rings to replay current CPU and memory usage).

If you want to use it on your system the first thing you need to do is install Conky, and a few other utilities that help make the magic happen:

Next, open your file manager. Press ctrl + h to toggle hidden files on, go to the .config directory and inside of it create a new folder called ‘conky’ (lowercase.

Download the Chertan Conky config from Pling. Once the download is complete unpack the archive and move the top level folder (‘Chertan’) to the .config/conky folder.

You should now be able to open a Terminal and run cd .config/conky/Chertan, and launch the Conky theme inside by running ./start.sh.

It’ll appear on your desktop BUT it may look like this:

There are some things we can do to improve the appearance and customise the functionality.

First step: install the Futura font included in .config/conky/Chertan/fonts. This will make the main text look as it does in the screenshot – but it won’t solve the missing weather icons (we’ll get to that at the end).

Next, fix the solid black background. If this does not appear on your system, skip this section. Otherwise, change the own_window_argb_visual value to false in both the Chertan.conf and Chertan2.conf files to make them look better against a dark wallpaper (light wallpapers look awful with it, so…).

Remember to save your changes!

If you use MPD as your default music player Chertan‘s now playing circle will work out of the box. If you use something else, like Spotify, Rhythmbox, Lollypop, or Amberol, you can make the Conky use playerctl.

Just replace the MPD commands in the Chertan2.conf with the ones from this screenshot:

The full format is exec playerctl metadata xesam:title, just replace title with ‘artist’ and ‘album’ as indicated above. Please be careful NOT to escape any of these commands by deleting a { or (.

Now, playerctl can report the position/duration of a now playing track but I couldn’t get this to “show” in the config, hence I swapped play position for album title.

And once again: remember to save your changes!

Want to adjust the position of the boxes? They’re positioned very nicely in the middle_middle by default but I like my Conky themes nestled in the top-right corner. I tweaked the various size and position settings (highlighted below) to find something that suited my tastes and my display resolution:

You need to edit the ./config/conky/Chertan/scripts/weather.sh script to replace the city_id value with the relevant weather code for your location from openweathermap.org. If possible do generate your own API key to use with the script (they’re free for personal use). If a lot of people use this script as-is, with the default API key it’ll probably stop working.

The weather script generates a weather.json in your .cache folder, and the jq tool we installed about 1000 words ago will “read” the weather information from the file and pass it to the Conky.

The weather script can be finicky to get working but you can give it a nudge by running ./config/conky/Chertan/scripts/weather.sh if you notice it’s not updating.

Remember to save your changes!

Lastly, the weather icon. This requires you to install another font, but this one you have to go out and download for yourself from erikflowers.github.io/weather-icons. Extract the .zip, go tot he fonts folder, install the .ttf file and then reset your system’s font cache by running fc-cache -fv and in theory… it should work.

But it doesn’t, not for me.

Even so: it’s a pretty nice Conky, and well worth the 10minutes or so to tweak.

If anyone can fix the things I can’t (or knows how to do them in a more efficient manner) comment below and I’ll update the article to include any suggestions. 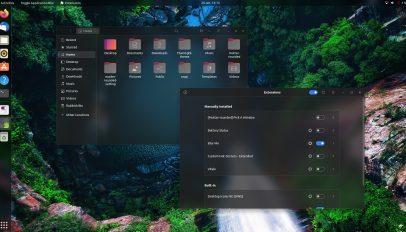 Easy Way to Get Semi-Transparent Windows on Ubuntu 21.10
Read Next