If you want to bring the chilled out tones of the popular Nord theme to your Ubuntu desktop you simply must check out the ‘Nordic’ GTK theme.

The Nordic GTK theme is a faithful implementation of the popular colour-scheme of the Nord theme For GTK-based desktop environment. Like the similarly-ubiquitous Dracula theme, Nord is a hugely popular colour scheme with developers, and there are a ton of ports for all kinds of applications.

Originally created to provide “optimal focus and readability for code”, Nord has bloomed in popularity with developers and non-developers alike.

Nordic brings the brings Nord’s ‘arctic, north-bluish color palette’ to Ubuntu and other Linux distros. If you’re using it with GNOME Shell you can enable a matching GNOME Shell theme too; KDE, Xfce, and Cinnamon versions are also available.

I tried the theme out on Ubuntu 21.10 and was impressed:

The default versions of all of Nordic themes use macOS-esque ‘traffic light’ window controls. These won’t be to everyone’s tastes so the designers also provide sub-variants using standard window buttons. You can see the standard window controls in the following screenshot, pictured in the Nordic Darker variant:

Regardless of which guise you opt for, Nordic gives the Linux desktop an elegant, relaxed, and balanced new look. Some GTK themes can be very “showy”, making use of dramatic or heavily stylised elements. Nordic is more subtle. It prefers to make the content of apps and windows the focus, not itself.

Nordic is free, open source software and should work anywhere other GTK themes do.

Download the theme from GitHub or from GNOME-Look. Just download the theme variant(s) you want, extract, move the folders to the hidden .themes folder in ~/Home (if it doesn’t exist create it). You can change theme on Ubuntu using GNOME Tweaks.

If you install the Nordic GTK theme you may want to extend the look further, throughout out apps. As well as a Nordic having an accompanying GNOME Shell theme, there are various app-specific Nord theme ports available: –

Additionally some apps ship with a Nord theme available in their settings, including BTop++, which we featured in our rundown of the best CLI apps for Ubuntu, and various Nord Firefox themes are available from the Mozilla community.

Do you like the Nord colour palette and use it everywhere you can? Let me know down in the comments. 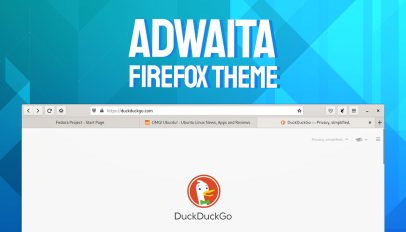 Adwaita Fan? Check Out This Epic Theme for Firefox
Read Next