A new long-term support release of Ubuntu is on the way, and so too is a brand new Ubuntu wallpaper contest.

In recent years long term support releases of Ubuntu have tended to include a “greatest hits” package of supplementary wallpapers, often sourced from those that won wallpaper competitions in the preceding three releases.

That approach has a logic to it as an LTS release, is, in many ways, a “best of” itself. Plus, there’s some real honour for those whose art is selected to ship in a version of Ubuntu that gets used across tens of millions of desktops, as opposed to just a few hundred thousand (which is still a pretty awesome feat, as is).

But for the next LTS Ubuntu’s community team is going back to basics. They’re going to run a wallpaper contest that community artists, professional and amateur alike, can take part in. Further details on the contest are going be be announced at some point, but they’ve already begun hyping it up on their social media.

Oh, I know: the majority of people use Ubuntu don’t deviate from whatever the default is. However, changing the wallpaper is arguably the one bit of “customisation” that a huge swathe of folks will do. Having quality backgrounds they can pick from is a fairly basic ask, and something every other major desktop operating system does with aplomb.

And yet Ubuntu is now in the habit of offering a measly two alternative backgrounds per release:

Sidenote: I love that Ubuntu shipped so few wallpapers in Ubuntu 21.10 and still bothered to make slideshow out of them. Wow, what a rollercoaster of variety that must be 🤣.

Wallpaper contest isn’t what it used to be

One way to get a decent and diverse cadre of complimentary backgrounds in Ubuntu is to widen the pool they’re picked from, hence a community competition.

That said, the Ubuntu wallpaper isn’t quite the community draw it once was (though it has at least reverted back to calling itself a ‘contest’ or ‘competition’, and not a ‘showcase of free culture’).

Participation is often low, rules vague, and, unlike the peak years, there’s no overall direction guiding submitters; no theme or riff towards which designs should steer. Worse, some people submit art they didn’t make, while others spam the contest with what feels like every family holiday snap they’ve ever taken — bring back the days of one entry per person!

Thing is, I’m not terribly sure a community-based wallpaper contest is the right approach. I’ve suggested before that Ubuntu ought, in light of low participation, do what other Linux distros do and pick some professionally-shot imagery from Unsplash.

However, then I boot into my Fedora install. Fedora not only manages to bang out a jaw-dropping default for each release, and also curate a supplementary wallpaper pack of impeccable quality — if Fedora can do it, why can’t Ubuntu?

I think the problem is in the selection, not the submission. Ubuntu needs to pick its winners with a critical eye. Forget the bon ami element; focus less on making a contest people enjoy, and more on one that has a point, a purpose, a role. A winning image should be as high quality as the codebase it represents.

Regardless of the community wallpaper selections (and respective quality thereof) it’s fair to say that most eyes remain on the default background. The return of the mascot to the default wallpaper is one of the things Ubuntu has got right in recent years:

Solid designed, but are they as imaginative or as inventive as the ones GNOME, Fedora, KDE Plasma etc cook up every six months?

So, if you’re an avid photographer, a graphic designer, or someone adept at sculpting polygons in apps like Blender PLEASE consider taking part in the new contest when you’re able to.

Ubuntu is a stellar OS and it deserves to ship with some stellar wallpapers in the default image. 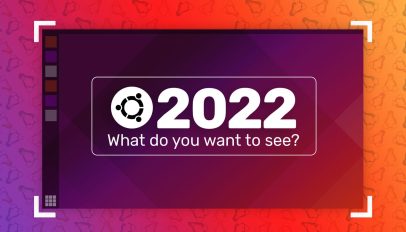 What Do You Want to See From Ubuntu in 2022?
Read Next