Xubuntu users can look forward to some new default apps later this year.

A handful of additional desktop applications are set to ship in Xubuntu 21.10 when it’s released later this year.

The applications set to be added include disk usage analyser app Baobab (pictured above, image credit Sean Davis) and the GNOME Disk Utility. Both of these are handy tools to have around. The former is incredibly useful for hunting down disk-space hogging files and folders, while the latter is my (and many others’) go-to partition manager.

Desktop music player Rhythmbox is also pegged for inclusion. A public vote taking place to help developers decide whether to ship Rhythmbox with its “standard” toolbar, or use the (I think more orderly) alternative toolbar, as used in Ubuntu:

A clipboard manager is also set to ship out-of-the-box — something I feel Ubuntu should’ve added years ago.

Clipman, aka the xfce4-clipman-plugin package, is the one Xubuntu devs will roll with. This is a well-integrated plugin that supports clipboard history (including search), and both text and image pastes.

There is a Xubuntu team vote taking place to decide if Clipman should be turned on my default. Speaking as a user my hope is that it won’t, not unless the distro adds upfront onboarding to let users know something logging their clipboard is active. Running without explicit request feels a bit icky.

Since GNOME 40 and GTK4 feature in Ubuntu 21.10 proper this will impact on Xubuntu to a degree. Davis notes that GTK4 ‘components’ will feature in Xubuntu 21.10. This results in the distro coming with 3 versions of the toolkit in use, as GIMP uses GTK2, whilst the bulk of Xfce is now based on GTK3. 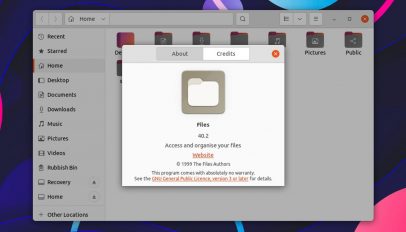