It’s been a busy few weeks in FOSS land. A number of well-known software projects have seen new releases, including those rounded up in this recap!

As always, I rely on readers to feed me news, be it through the on-site tip form, an email to one of the listed addresses, or even using the medium of interpretive dance — just make sure I’m in eye shot before starting, okay? 😉

A new version of the Ubuntu-based Linux distro Zorin OS is available for testing and it’s packed the hilt with improvements — just look at it! Zorin OS 16 sports a smart new appearance thanks to a ‘more polished default theme that’s easier on the eyes’ and the inclusion of a dynamic desktop wallpaper.

There are also immersive new touchpad gestures that really help elevate the core experience. In this beta you can switch between workspaces by swiping 4 fingers up or down, and open the activities overview using a 3-finger pinch on the touchpad.

Other neat changes include a retro-inspired ‘Jelly mode’ (I won’t spoil it), plus major speed tweaks, a Sound Recorder app, redesigned appearance tool, and …Much, much more. If you try it out — and you really should — be sure to report any bugs you find, and file feedback using the included Feedback app pinned to the taskbar.

One major distro beta release not enough? Have another as bug hunters and app developers alike can go go hands on with a beta build of elementary OS 6, the distro’s next major release.

This update is based on Ubuntu 20.04 LTS and comes with a number of modest improvements to the Pantheon desktop environment plus updates its associated software stack. There’s also as out-of-the-box Flatpak app support, and a new system installer.

Monetary sponsors of elementary project get access to daily builds, and the stable version is a ‘pay what you want’ affair. But this beta is, rather notably, available freely. Do note that it won’t be possible to upgrade elementary OS 6.0 beta to the final stable build, though.

Twitter aficionados can update to Cawbird 1.4. This uplift to the open source desktop Twitter client carries a crop of commendable bug fixes and UI refinements, plus a few new feathers features.

Additionally, the ’emoji’ picker button now uses a smiley face icon to better align with similar features on other platforms (in earlier builds the emoji picker icon is a penguin). Bug fixes include issues handling links with ampersands in them, and cropping of tweets in timelines when Cawbird window is narrow.

You can download and install Cawbird 1.4 on a wide range of Linux distributions by adding the official OpenSUE Build Service (OBS), or by downloading the latest installer package directly. An unofficial Cawbird Snap package is available too but is still on version 1.3.1 at the time of writing this roundup.

A new stable release of the go-to Linux video editor is now available. Kdenlive 21.04 comes with a raft of UI and UX improvements, plus a handful of new features to help avid videographers channel their creativity in new and exciting ways.

New in this release:

Also included is a new Speech-to-Text feature. This is able to automatically transcribe audio to text, which could be useful to those creating captions or shipping subtitles with a project.

Kdenlive 21.04 is available to install from Flathub; Ubuntu users can get it form the official Kdenlive Stable PPA; and a distro-agnostic appimage is linked below. 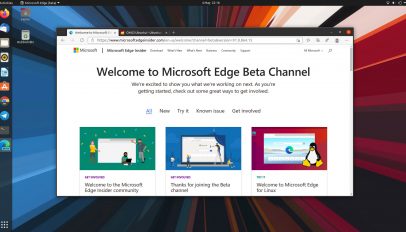 Microsoft Edge for Linux is Now in Beta
Read Next