It’s been a busy few weeks for Linux laptops, with new devices from StarLabs and TUXEDO being announced.

Not wanting to be left out is UK-based computer company Entroware, who just unveiled their latest Ubuntu laptop — and it packs some huge tech inside.

It’s time to say hello to the Entroware Proteus.

The Entroware Proteus is 15.6-inch laptop packing a whopping 73 Wh battery. Even used at full tilt, this laptop isn’t going to need recharging as often as other 15-inch workstations, meaning users can get more done,with fewer adapter-related interruptions.

Admittedly, the 15.6-inch matte IPS LED display (1920×1080) isn’t a wow feature — TUXEDO’s InfinityBook Pro 14 has a 2K screen in its base config, and a 3K screen for just €50 more — but the panel on the Proteus should feel roomier thanks to a svelte bezel surround.

Like many modern laptops the Proteus has an expansion slot for a second M.2 storage device, giving it a 4 TB capacity overall — which isn’t too shabby, at all!

A versatile Thunderbolt 4 port is included supporting power, display, and data transfer. Other holes to stick things into include a pair of USB Type-A ports (one 2.0, one 3.2); and a single USB Type-C (3.2) port.

Plus, the Proteus has a 3.5mm combo audio jack, a full-sized HDMI, and obligatory ethernet. A 720p webcam (neatly nestled in a lip on the top bezel) is included, as are some on-board speakers, a built-in microphone, and a microSD card slot.

If all you need a laptop for is reading your fave blogs (ahem 😉) and watching movies on, then yeah: this laptop is overkill. Those who place bigger demands on their portable — which at 1.74 Kg, certainly is — should find the Proteus has the power to keep pace and perform when needed. 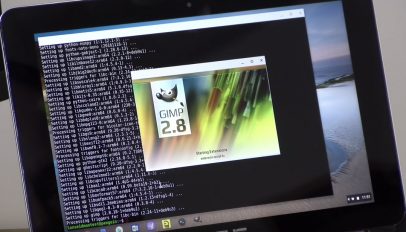