As you may (or may not) have heard by now the first Ubuntu 20.04 point release is out and to mark the occasion Canonical has put together a new infographic.

The overriding theme of their visual data-dump is “Ubuntu from 2004 to 20.04” (see what they did there?) and, accordingly, comes chockfull of stats, facts, and other trivia about the OS, the project, and its achievements in the years until now.

Well, its bangin’ security for one:

Snap adoption for another:

And its exemplary efforts to extend support windows periods:

And that’s just a small teaser.

Now, I will say that you may want to keep in mind that it is Canonical of 2020 who has made the image. Ergo it is meant to be celebratory, rather than a comprehensive/chronological catalogue of the project’s every whim.

Or to put it another way: all the name checkin’, fact sharin’, and hype peddlin’ presented in the graphic is mainly given over to Ubuntu’s various non-desktop successes like Kubernetes, OpenStack, Ubuntu Core, rather than the desktop distro itself.

I hate making infographics. I put together one in 2014 to recap the results of our reader survey. It was a slog.

So big props go to the Ubuntu design team for not only coming up with a variety of different ways to illustrate milestones and present figures, but coming up with the will to do it for such a loooooooooong infographic.

Yes, this one is very long infographic. If anything I think Canonical has just created the first info-tome with this. I didn’t think I’d ever stop scrolling!

Okay, I’ve written enough words. You wanna see the real deal. You can see the whole infographic over on the Ubuntu blog in its full 8,192 pixel-long length glory… 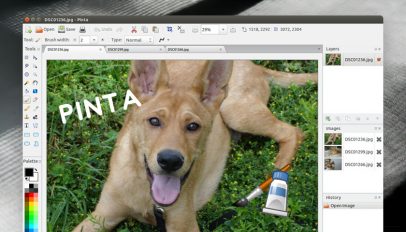 Pinta Image Editor Gets First Update in 5 Years
Read Next