Buckle up for the ride as you can now download Ubuntu 20.10 daily builds for testing!

Freshly spun ISOs of what will become the next stable Ubuntu release will be produced each and every day (well, almost) from now until the stable release of Ubuntu 20.10 in October.

Both “pending” and “current” ISO images are available from the Ubuntu CD image server, with the latter set having passed a series of automated tests.

This is an important milestone in the development cycle though, as of April 30, there’s not exactly anything “new” in the daily builds to see.

Many testers like to install an early daily build and keep updating it ever day until the final, stable release arrives — though naturally there’s high chance of hitting bugs, breakages and other road bumps throughout the ride to release town!

As you should be able to tell from their name, Ubuntu 20.10 daily builds are not the final, stable release and should not be considered stable (especially early on in the development cycle).

Do not install a daily build as your primary OS (and yes this includes your mum’s/boyfriend’s/boss’s laptop). Use a separate partition, a dedicated development device, or a virtual machine if possible.

Also bear in mind that daily build quality may vary from day to day, and you are likely to encounter usability and/or stability issues as and when features are added (or in some cases removed).

Provisos out of the way, you can use the link below to download a Ubuntu 20.10 daily build: 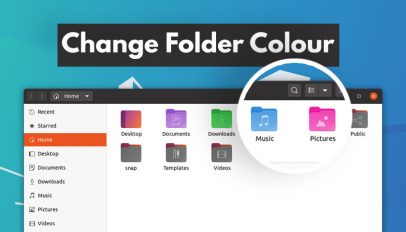 ‘Folder Color’ Now Works with Ubuntu 20.04 and the Yaru Icon Set
Read Next